© Image: Eastern Plains
North of Tshokwane, there are many options to explore the central Kruger savanna. The main road north to Satara (H1-3) first follows the Vutomi River and then the N'waswitsontso River before reaching the southernmost Baobab in Kruger 20km from Tshokwane. In summer, look out for cuckoos at the river crossings and in the vicinity of the most southern Baobab.

To the north-east is the Lindanda Road (S35), which takes one into the heart of the eastern grasslands past the site where ranger Harry Wolhuter survived his lion attack in 1904. This road joins up with the Trichardt Road (S37), which skirts the Lebombo for a good distance along the Makongolweni River until it reaches the Sweni River.

The proof of the high nutritional value of these grasslands is in the heavy birds that are to be seen here - the Common Ostrich*, Secretarybird, Kori and Back-bellied Bustards*. This tar road is obviously good for all grassland species, particularly in late summer. See Sweni and N'wanetsi

Southern Yellow-billed Hornbills begin to give way to Red-billed Hornbills in central Kruger, while rollers and starlings are the dominant birds along this road. The H1-3 leaves the Sabie River catchment area through a landscape of sweetveld grassland, acacia and bushwillow scrub.

There are two good water holes along this road - Maziti and Kumana, both of which are usually permanent water sources. Look out here for Saddle-billed and Woolly-necked Storks, grebes, jacanas and Black Crake.

From the Satara road, three secondary roads lead westwards into the granite sourveld to join up with the Nhlanguleni Road (S36). These are the Vutomi (S33), N'waswitsontso (S125) and Sweni (S126) River Roads that cut back through the acacias into Knob-thorn and Marula savanna. Green Wood-Hoopoes*, Acacia Pied Barbets and Double-banded Sandgrouse are commonly seen in this environment.

The Acacia Pied Barbet is the most widespread barbet in southern Africa and appears to have gradually been expanding its range over the past century, moving into the Karoo where people have planted trees and made dams.

Dominant raptors in this area are the Tawny Eagle and Brown Snake-Eagle. Dickinson's Kestrel has been seen as far south as the Sweni watercourse. 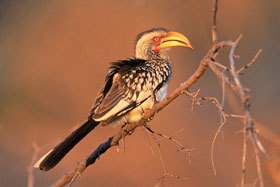 The Southern Yellow-billed Hornbill (Nkoro in Shangaan) has found an interesting way to protect the nesting female and her eggs. When the female is ready to nest she chooses a hole in a tree and virtually imprisons herself by plastering up the entrance with mud and faeces. She leaves a tiny hole through which she is fed by her partner. She stays put in her wooden cell for about 50 days during which time she moults completely. Excretion is done through the hole by both the mother and chicks.

Veteran Kruger ranger Elphas Ngiba has witnessed an interesting community-orientated phenomenon amongst hornbills. Should the female hornbill sense that something has happened to her mate, she sends out a specific distress call which attracts other male hornbills in the area, which will then come and feed her through the hole. The Shangaan expression to 'send a hornbill where it will burn its wings' is based on the hornbill's nesting habits, and the female's vulnerability to dangers such as veld fires. The expression refers to any attempt to set someone else up to take the blame for something one has done oneself. 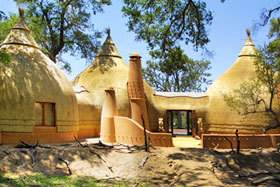 Where to stay Around Skukuza