© Brett Hilton Barber
The Olifants River between the camp and the Lebombo is one of the main breeding grounds in Kruger of the rare Saddle-billed and Black Storks. They can sometimes be seen from the river road between Olifants and Letaba (S44).

One of the best birding spots in the area is the low-level bridge on the Olifants River on the S92 close to Balule. There are usually plenty of storks, herons and kingfishers at the crossing where White-crowned Lapwing* and Black-winged Stilt often grace the sandbanks. Kruger rangers say that during night drives, this is the best place around Olifants to see Pel's Fishing-Owl and the White-backed Night-Heron. Chris Patton has recorded the Black Heron* here.

One of the great birding mysteries of Kruger is why the White-crowned Lawping* is commonly found along the Olifants but is entirely absent from the nearby Letaba River. Ian Whyte has observed this year after year while flying over the area doing the annual hippo census. The White-crowned Lawping* occurs further north and south, but bird experts are at a loss to explain why this species so absolutely avoids the Letaba.

The high level bridge over the Olifants on the H1-4 is a recommended stopping point. One may get out of one's vehicle in the demarcated area on the long bridge.There is usually something of note around the sandbanks and pools of the Olifants watercourse. Vultures often enjoy a lunchtime or late afternoon bath upstream from the bridge after a hard day's work at a kill.

In summer, there are sometimes flamingos and pelicans in the sand beds, while African Spoonbills and a variety of storks occupy themselves in the shallows. This is a good place to spot White-backed Night-Heron as well as the more common herons. Kingfishers are usually very active. Verreaux's Eagle-Owl is often out at sunset hunting Little Swifts or bats that live under the bridge.

Just south of Olifants is N'wamanzi Lookout Point. The site, on top of a steep hill is unremarkable from a birding point of view, but it offers a fine view over the river divide between the mopaneveld to the north and the bushwillow woodlands to the south. 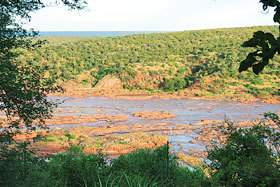 Olifants Camp is poised on a high ridge overlooking the Olifants River about 10km upstream from its confluence with the Letaba. Taken from the Afrikaans word for elephant , the large camp has a range of activities from mountain-biking and stargazing to the more traditional escapes of guided bush walks and drives. A backpacker's trail was introduced at Olifants in 2005 (see Olifants River Backpackers Trail). There is no camping or caravanning at Olifants - the nearest camp that offers these facilities is Balule.

Olifants is a good birding camp because of the variety of habitats and the proximity of the two major river systems - the Letaba and Olifants. The ridge in front of the camp provides excellent thermal upcurrents during summer for raptors, and the Gabar Goshawk, Eurasian Hobby* and Bat Hawk are often seen hunting at sunset from the camp. Birds associated with Olifants include the Red-winged Starling, Yellow-bellied Greenbul* and Mocking Cliff-Chat*, all of which do well in the rocky landscape. Sunbirds are particularly conspicuous at Olifants when the aloes are in flower. Other notable birds in and around the camp are the Trumpeter Hornbill and Acacia Pied Barbet*. 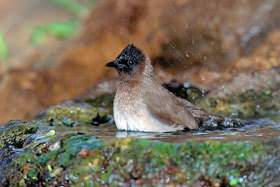 A Dark-capped Bulbul* kept in captivity lived for 26 years and five months. According to Roberts VII the oldest ringed bird living in the wild was 12 years old. The Dark-capped Bulbul* is a common bird seen in most of the rest camps, noisily foraging in trees and shrubs for fruit and insects. At dawn, it can be seen hunting around camp lights for nocturnal insects. It is adept at plucking a spider from its web.

Balule Camp is on the banks of the Olifants River, 11km south of Olifants Camp. It prides itself as an authentically rustic, bushveld experience and is the ideal spot for die-hard campers. There is no shop or petrol station and only rudimentary facilities are available. There is no electricity for the six small huts (paraffin lamps provide lighting at night) that share a communal kitchen and ablution block.

The adjoining camp site lies in a large grove of Natal-mahogany, Baobab and Sausage-trees. Guided bush walks are offered. Among the specials at Balule are Pel's Fishing-Owl, which hunts at night along this stretch of the river and the Wood Sandpiper, which is often on the river banks. Although it is close to Olifants Camp, birding at Balule is a different experience because it is set low in the Olifants River valley and not on the top of a ridge. 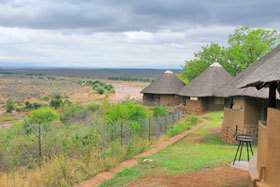 Where to stay Around Punda Maria