"Happily too, the Kruger Park, in preserving a sample of the old Africa with all its wildlife, has saved incidentally a full natural stock of the birds of prey; and visitors who are not too absorbed in the quest for lions to cast their eyes aloft now and then, have a chance of catching many glimpses of what is likely soon to be, if it is not already, the finest show of wild raptorial birds remaining in the modern world."(Leonard Gill 1945).

The Birds of Prey 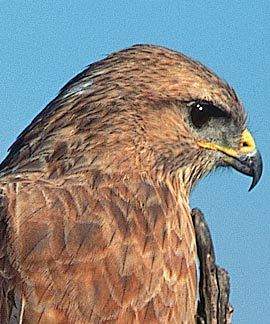 Large eagles can live for up to 45 years, while smaller raptors like kites and buzzards have a lifespan of around 15 years.

Raptors are the lords of the skies and Kruger is their sanctuary. There are 83 species of raptor that regularly occur in southern Africa. Of these, some 58 species are commonly found in Kruger.

The Park's largest resident raptor is the Lappet-faced Vulture, which weighs up to 7.9kg and has a 2.8-m wingspan. The smallest raptor in Kruger is probably the Pearl-spotted Owlet weighing in at about 65g, with a wingspan of around 35cm.

Raptors are dramatic hunters. Their name is derived from the Latin word raptare, which means to seize. Broadly classified under the family Falconidae, raptors hunt during the day, have powerful, hooked beaks, strong, curved talons and in the words of Leonard Gill, 'imperious expressions'.

The group includes eagles, hawks, buzzards, harriers, kites, falcons, vultures and the Secretarybird. The Strigiformes - the night hunters, which include 12 species of owl - are also classified as raptors.

The Big Three eagles of Kruger are Verreauxs' Eagle, the Martial Eagle and the African Crowned Eagle. There has been some debate as to whether aggressive birds such as shrikes and drongos that hunt live prey should also be classified as raptors, but as they lack the defining hooked beaks and talons of the Falconiformes, they have not been included.

In many instances, raptors find partners for life and exhibit elaborate aerial courtship displays. Often the female is larger than the male. Many of the bigger raptors practice 'cainism' (derived from the biblical story of Cain and Abel) in which the first-born chick kills its sibling to secure its own survival. The parents allow nature to take its grisly course.

This section on raptors has been structured according to the comprehensive Raptor Identification Guide for Southern Africa by Ulrich Oberpreiller and Burger Cillie.

They divide birds of prey into the following 11 broad groups, based on morphology rather than names: