With luck and the right conditions, one can have good sightings on any of Kruger's roads. However, the best birding is usually on roads that traverse a diversity of habitats and include stretches of riverine forest. And although there are never any guarantees in birding, these recommended routes offer chances of good sightings, even lifers' on these roads, and is higher than average. 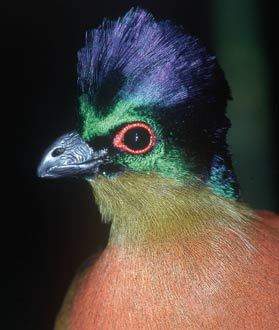 Everybody knows about the Big Five. These are the animals that were considered the most dangerous and most desirable trophies by the big game hunters of the 19th century - the lion, leopard, buffalo, elephant and rhino.
Although current conservation trends encourage visitors to move beyond a checklist mentality and to look for the inter-relationships of species and habitats, most visitors to Kruger still dream of seeing the Big Five in a single trip.
The Park's birding fundis - aware that birders will always be a checklist ticker - have come up with the avian equivilant: the Big Six.

The largest Kruger vulture has a striking pinky-red head; usually the dominant scavenging bird at a kill; found throughout Kruger but mostly in the central grasslands.

A powerful bird of prey with distinct white chest covered in black spots; it has the largest wingspan of any eagle in Kruger and is found in mixed woodlands throughout the Park, particularly in trees growing along the drainage lines where prey is more plentiful.

One of Kruger's rarities, distinguished by its striking red, yellow and black bill; found mostly in the riverine forests through­out the Park, but most often in the north, particularly around Letaba, Shingwedzi and the Luvuvhu area.

A large owl with flecked, rufous markings; this is the real trophy sighting because of its nocturnal habits and restriction to large watercourses, mostly along the Luvuvhu River.

An endangered, but quite common terrestrial, red-faced, heavy bird; it is the most vocal of the Big Six and is found in small groups in woodland pockets throughout Kruger.
Best Birding Guide to Kruger Park
©2021 Siyabona Africa (Pty)Ltd - Private Tours and Safari