© Albert Froneman
The Luvuvhu River is one of the most engaging drives in the Park. The combination of riverine forest and the richness of the surrounding sandveld ensure a high species diversification.

The largest recorded prey of the Brown Snake-Eagle is a 2.78m long mamba caught in Zambia.

The drive (S63) from the bridge to Crook's Corner is only about 15km but plenty of time should be set aside for it. Obviously, Pafuri Picnic Site and Luvuvhu River Bridge birds are also seen along this road, which is usually reliable for Crowned Hornbills and Grey-headed Parrots.

The riverside forest is dominated by giant Nyala and Ebony Jackal-berry trees, interspersed with thickets of Fever-trees, acacias, Sycamore Fig and Lala-palms. There are numerous lookout points over the river, where a host of water birds can be seen, including the less common Saddle-billed, Black and Yellow-billed Storks, and the African Openbill. Sandpipers, plovers and other small waders step delicately between the crocs as they scout the water's edge for insects

Kingfishers watch the action from branches hanging over the river, while the bush birds include the Trumpeter Hornbill, Eastern Nicator*, Gorgeous Bush-Shrike and Tropical Boubou.

The alluvial floodplains are vulnerable to climatic changes, and the Luvuvhu woodland has undergone a character change of sorts with weather extremities during the past 30 years - Cyclone Demoina in the early 1980s, the intense drought of the early 1990s and the floods of 2000 have all taken their toll. Many Sycamore Fig trees along the river were washed away and there has been a noticeable decline in the populations of Trumpeter Hornbills and African Green-Pigeons, which depend heavily on the figs. The long-term effects of bush degeneration and regeneration on the valley's birdlife remain to be seen. 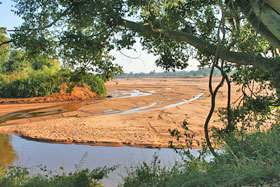 The Luvuvhu and Limpopo Rivers meet at Crooks' Corner, which stands on the three-way border between South Africa, Zimbabwe and Mozambique. It's named after the outlaws who lived here at the end of the 19th and beginning of the 20th centuries. It was home to a wild assortment of ivory hunters, illegal labour recruiters and general brigands who found it a convenient location to slip across the frontier into what was then Portuguese East Africa or Southern Rhodesia if the authorities came looking for them.

Crooks' Corner, at the end of the S63, allows one splendid views over the wide Limpopo River sandbanks. Early in the morning the Green-capped Eremomelas are very vocal and the Grey Penduline-Tit, White-fronted Bee-eater and Common Waxbill are very active in the riverine bush. The Green-backed Heron and White-backed Night-Heron may be seen in the undergrowth on the edge of the riverbed. Black-throated Wattle-eyes* are resident in the surrounding bush.

Look closely in the Lala-palms just south of Crook's Corner. Lemon-breasted Canaries breed in these palms and this is about the best chance one has of seeing these rarities in the Park. Among the less common birds seen at Crook's Corner is the Scaly-throated Honeyguide. The White-crowned Lapwing is often on the sandbanks, and if there are pools of water in the riverbed one may have an afternoon sighting of White-backed and Lappet-faced Vultures taking a bath. In summer, the Yellow-billed Kite and Steppe Eagle are regular visitors while the African Fish-Eagle is resident all year round.

Pafuri Border Post is open in summer (1 October - 31 March from 0800-16h00) and in winter (1 April - 30 September from 08h00-15h00). Currently no vehicles that weigh over four tons are permitted through the border. Commercial traffic is allowed through Pafuri. 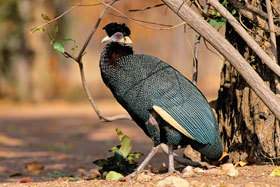 Nyala Drive is a 5km route along the Luvuvhu River upstream of the bridge through a series of impressive sandstone koppies known as the Matshitshindzudzi Range. This is the favored habitat for the Crested Guineafowl, secretive game birds with 'afro-mop' crests that feed next to dense pockets of bush on the side of the sandy roads.

They are often found with troops of vervet monkeys, feeding on whatever scraps are dropped from the branches above. The cliffs along Nyala Drive formed a natural defence for the ancient city of Thulamela (see The birds of Thulamela below). Verreauxs' Eagles* nest in these cliffs.

The Birds of Thulamela

Thulamela was the headquarters of an Iron-Age kingdom that controlled trade between the southern African interior and the Mozambican coast during the 14th and 15th centuries. It was occupied by the ancestors of present-day, Shona-speaking Zimbabweans. The Thulamela culture was one of sacred leadership w 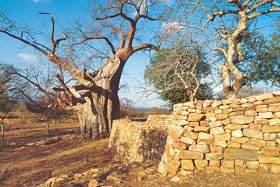 here the king was believed to have direct links with divine powers through the ancestors. In Shona ideology, God - known as Mwari - lived in the sky and was responsible for rain and fertility. Among the artifacts recovered from Thulamela were stone carvings of birds.

According to Wits archaeologist Tom Huffman, who has extensively studied ancient Shona culture, birdstones were shrines for the spirits of former kings, while the bird theme was a metaphor for the mediating role of royal ancestors, especially in rain procurement rights. Huffman suggests that lightning was seen as the needle that stitched together heaven and earth. A mythical bird, Shiri ye denga, was closely associated with lightning. Contemporary opinion is divided as to what kind of bird Shiri ye denga is or was - birds closely associated with Shona culture are the African Fish-Eagle, the Bateleur and the Verreauxs' Eagle.

Where to stay near Parfuri