© Brett Hilton Barber
The best route to Pafuri from Punda is to take the S60 dirt road that skirts the base of the mythological Gumbandebvu Hills through an extensive tract of mature Mopane woodland on ecca shales. Potential sightings along this road include the Eurasian Golden Oriole, the Racket-tailed and Purple Rollers, Arnot's Chat and Dickinson's Kestrel 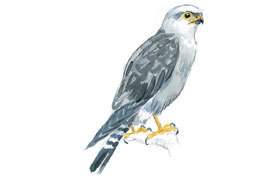 The road bisects two ecozones - Mopane woodland to the west and sandveld to the east. After eight kilometres, the landscape starts opening up and typical grassland species may be more apparent. These include the Black-bellied* and Kori Bustards and the Southern Ground-Hornbill. If the area is overgrazed or burnt, Temminck's Courser may be seen, while the Double-banded Sandgrouse and Harlequin Quail are dawn regulars on the roads.

Elusive Kestrel of the Far North

Dickinson's Kestrel is one of the elusive 'lifers' of northern Kruger; this small kestrel has a distinctively squarish head and is found where there are Baobabs and Lala-palms, its favourite nesting tree. Dickinson's preys on canaries, warblers and cisticolas, and will decapitate the prey before feeding it to its chicks. It is very protective of its nesting site and is fearless in chasing away larger predators.

Klopperfontein has a strange energy which invites unusual sightings. It was here that Yellow-billed Oxpeckers mysteriously reappeared in Kruger 64 years after they had last been recorded in the Park. Klopperfontein was a landmark on the Ivory Trail. There are a number of broken koppies around Klopperfontein, the most prominent being Matekevhele (482m). In traditional Venda folklore this is a spiritually powerful hill, and travellers were reluctant to camp too close to it.

Baobabs are more common north of Klopperfontein, while the Knob-thorns associated with the shrub Mopane of the south become rarer. North of Klopperfontein, the extensive, flat plains undulate towards the sandstone ridges that rise out of the Luvuvhu basin. Plant diversity increases along the drainage lines. Hornbills and Grey Go-away-birds are common, particularly in winter.

Klopperfontein Dam (as opposed to the nearby Klopperfontein windmill) is a good spot to switch off the engine and imagine the free and easy, adventurous lifestyle of ivory hunter Dirk Klopper, who camped here for days at a time during his regular forays into northern Kruger in the early 20th century.

The African Jacana, Comb* and Whitefaced Ducks, Greater Moorhen and African Rail may also be seen. The African Fish-Eagle makes use of the dead trees behind the water hole to scan the dam. Dickinson's Kestrel and raptors not commonly recorded in Kruger, like the Pallid and Montagu's Harriers, have been recorded at Klopperfontein.

The Southern Ground-Hornbill is sometimes seen in small groups on the loop (S61). The bird's indigenous names are onomatopoeiac, taken from the bird's well-known deep, booming call - insingiza in Zulu, nghututu in Shangaan.

The species is under threat in South Africa, partly because it is in such high demand on the local muthi market. Because the birds have such an unhurried and calmly purposeful disposition, they are used by traditional healers as an effective ingredient in tranquilisers for agitated people. The Southern Ground-Hornbill is also used widely as a key ingredient in lightning protection muthi - the bird's bones are ground up and rubbed into incisions on the upper body to ensure long-term protection during thunderstorms.

There's usually some animal activity around Klopperfontein windmill. Southern White-crowned Shrike may appear in the Knob-thorns and there are often small flocks of Wattled Starlings that feed mostly on the ground, probing beneath the grass cover to catch insects. They often fall prey to Wahlberg's Eagle.Where to stay Around Punda Maria

From Klopperfontein, the landscape falls away towards the broader Limpopo River valley. Along the H1-8, Kremetart and Mashikhiri Water Holes are worth stopping at. On a lucky summer's day one may come across less common birds such as the Blue-cheeked Bee-eater and Black Cuckoo. There are usually lots of rollers along this drive. Most of them are likely to be the Purple Roller which seems to favour the western half of the Park, while the authors have spotted the Racket-tailed Roller here in summer.

Dickenson's Kestrel may be seen. A grassland bird that does well here is the common Monotonous Lark. Unlike most other larks, it is not a songster - its name appropriately describes its somewhat plain, repetitive call. There are an estimated half-million Monotonous Larks in Kruger.

The landscape becomes more broken as the H1-8 descends into the Luvuvhu River valley, which is part of the greater Limpopo system. Baobab Hill is the gateway to the old 'Ivory Trail badlands'. The landmark koppie is an old camping spot used by labour recruiters in the early part of the last century. From here the flatlands suddenly give way to deep valleys and ridges and the road winds easily down towards the alluvial floodplains.

One of the remarkable features of the Luvuvhu River valley are the distinctive bands of vegetation as one gets closer to the main watercourse. First, the Mopane shrubveld gives way to tree Mopane woodlands; next is the acacia woodland, Fever-tree forest, Southern Lala-palm clusters and finally the riverine bush itself with its magnificent Nyalas, Sycamore Fig Leadwoods and Apple-leaf trees.
Next - Departure Dates
Best Birding Guide to Kruger Park
©2021 Siyabona Africa (Pty)Ltd - Private Tours and Safari