Of the 900 or so recorded bird species in southern Africa, approximately 500 can be seen in Kruger, including a number of rarities that are seen nowhere else in South Africa. The diversity of avifauna is encouraged by Kruger's geography - the northern part of the Park is the southernmost range for many Afro-tropical species while southern Kruger is the northernmost range for many South African birds.

The Kruger National Park is the most accessible wildlife destination in the subcontinent. It is the cornerstone of what will be one of the world's biggest game reserves once the vision of the 30 000 square kilometre Limpopo Transfrontier Park is realised. Its sheer size, varied birdlife and high chance of seeing rarities makes the Park a sublime birding experience for both beginners and veterans.

The Kruger bird list has 480 species, but there is some latitude around this. As the late birding authority Ken Newman once noted, it all depends on how many strays and stragglers are included. He believed it would be more accurate to put the figure at 479. Alan Kemp had 517 on his list, while UCT zoology department researchers Cliff Moran and John Hoffman argue that the figure should be 489. 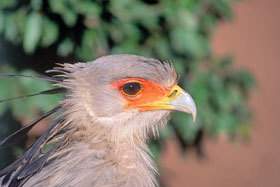 This is largely an academic discussion as one will never see all of the Park's species in a lifetime. This is because of the number of rarities on the species list. Over 20% of the birds here can be classified as rare or opportunistic, while barely 2% are guaranteed sightings. Other factors that limit the number of sightings are that 107 species have a limited distribution range within the Park; 94 are seasonal; 109 are classified cryptic - that is they are either shy or silent - and 18 are purely nocturnal. There's also the fact that the relationship between birds and their environment is a dynamic one, with ranges expanding and contracting based on the availibility of food and long-term climate changes.

So how many birds should one expect to see? Obviously it all depends on the time of year and the duration of the visit. During a focused three-day trip to Kruger one should be able to notch up 150 species in summer, and about 75 in winter, probably more if one's up north.

The best time to bird in Kruger is between October and March when the bird population swells by approximately 200 migrant species that have flown south from elsewhere in Africa and from Eurasia. See Birding Calendar

Migrants and nomads normally arrive after the first summer rains when the availability of water ensures that food is plentiful. Most depart by the second week of April.

The Park in its entirety is good for birding, although the tracts of monotonous mopane scrubveld in the north-east are not for the faint-hearted. Kruger is particularly renowned for the birding in the far north in the sandveld around Punda and Pafuri, and between the Luvuvhu and Limpopo Rivers. There is also excellent birding along the Sabie River, around Letaba and Olifants and along the Shingwedzi River. Not only is the Park good for birds, but birds are good for the Park. Studies have shown that birds play a crucial role in maintaining the diversity of the savanna through seed dispersal and pollination and keeping the veld clean of carrion.