© Black Kite
The origin of today's migration patterns to Kruger Park may lie in the Ice Age of approximately 15 000 years ago. Ornithologist GL Mclean suggests that many European birds of temperate regions gradually extended their ranges northwards as the ice melted and new feeding grounds opened up. 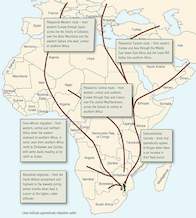 Billions of birds live in a winterless world, chasing summer across the globe. They migrate long distances between the hemispheres, timing their arrivals and departures according to the availability of food. Most of the birds that migrate annually to southern Africa arrive in summer when food sources are most plentiful.

The long-distance migrants are mainly insect-eaters and waders, which follow set migration patterns. Seed-eaters, on the other hand, have more random movements while fruit-eating birds are generally resident. National Geographic estimates that 4.5 billion birds, representing approximately 185 species, fly north to south and back again between Europe, Asia and Africa each year.

The long-distance migrants are mainly insect-eaters and waders, which follow set migration patterns. Seed-eaters, on the other hand, have more random movements while fruit-eating birds are generally resident. National Geographic estimates that 4.5 billion birds, representing approximately 185 species, fly north to south and back again between Europe, Asia and Africa each year.

In doing so they relinquished their original habitats to localised species. But when faced with winters too cold to endure, the migrating birds returned southwards only to find their original habitats overcrowded. Forced to find new feeding and breeding grounds, they flew further south. This is one theory of how the current bird migration patterns between Eurasia and Africa evolved.

Other experts believe migration behaviour is much older, pointing to the migrations of birds between Madagascar and mainland Africa which may have begun when the ancient super-continent of Gondwanaland split up and Madagascar became an island over 100 million years ago.

Of the migration routes into Africa, the one through the Middle East appears to be the most trafficked. According to National Geographic's 2004 Global Bird Map the marshlands and grasslands of the Dead Sea Valley host the world's largest gathering of migrant birds. 'As many as a billion birds, exhausted from over-desert flights between Africa and Europe or Asia refuel near the Red Sea.' Unsurprisingly, over half the aircraft accidents in this area are caused by birds.

The Distance Champion of Raptors 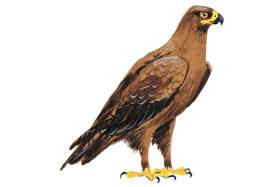 The Lesser Spotted Eagle has been dubbed by National Geographic as the 'distance champion of raptors'. One bird was tracked on its four-month southward migration from Poland to the Lebombo. It left Rostock in northern Germany on September 21, 1997.
It reached the Bosphorus on the edge of the Black Sea on October 5. Ten days later on October 15 it was tracked crossing the Suez Canal. This represented a fairly leisurely flight from Europe into the Middle East.
What's interesting is that it put on the speed through northern Africa, taking about a month to fly through Egypt, Sudan, Ethiopia, Kenya and Tanzania before it was recorded on the edge of the Great Rift Valley in northern Zambia (Nov 16).
It remained in Zambia for six weeks - probably picking up condition after its rapid journey through east Africa - and crossed Lake Kariba into Zimbabwe on January 3, 1998. It was recorded in the vicinity of Gonarezhou two weeks later, where it remained for two days (Jan 18 and 19).
It eventually took up a nesting spot in the Lebombo Mountains on the Kruger border with Mozambique on January 23rd 1998. It departed northwards four months later

Migration can be a dangerous excercise.International birding experts estimate that some 20 000 falcons may kill 10 million migrating birds over the Mediterranean every year. Most migrating birds avoid the Sahara Desert, either sticking to the western African coastline or travelling down east Africa along the Great Rift Valley which is a major bird highway. Generally, migration routes bypass the central African rain forests because of the territorial dominance of birds living in the rain forests.

Roughly half of the 500 or so birds found in Kruger are residents. Regular migrants are divided fairly evenly between those from Eurasia and Africa. Then there are the regional nomads, such as the Red-billed Quelea, whose appearance in Kruger is usually determined by rain.

A less significant migration pattern is that of altitudinal migrants - those birds that come down from the escarpment in winter to feed in the lowveld. Among the rarer winter visitors to Kruger is Guernsey's Sugarbird. 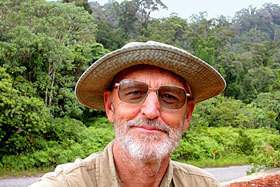 Alan C Kemp is widely regarded as the pioneer of Kruger birding. During his tenure as ornithologist of the Transvaal Museum, Kemp published his monograph, "The Distribution and Status of the Birds of the Kruger National Park"
Through a painstaking process of counting the number of species in each habitat and trying to guage their density per square hectare, he established a framework which was published in the SA Journal of Science in 2001.
Stressing that this was merely a preliminary excercise to generate a hypothesis, Kemp's conclusion was that at the height of summer there are approximately 42 million birds from 517 species in Kruger.
Of these Red-billed Quelea account for well over 33 million birds. (See Rolling Mass Action).

Usually, the first sign of migratory activity occurs at the end of winter or in early autumn with the arrival of Wahlberg's Eagle and then the Yellow-billed Kite.

Klaas's Cuckoo was commonly believed to be an early arrival from further north in Africa, but there is a population of these cuckoos that remain in Kruger through winter. They are often active during the dramatic white flowering of the Wild-pear Dombeya, which attracts cuckoos because of the high numbers of insect larvae and caterpillars that live in its bark.

Palaearctic waders are also early arrivals. These include the Common Greenshank, Common and Wood Sandpipers, which are 'passage migrants' in that they pass through Kruger in early summer. Their numbers decline towards the end of the year as they move further south. Most migrants arrive during the course of September and October. Among the last visitors to arrive are the Amur Falcons* and Lesser Kestrels.

Mysterious Flight of the Falcons 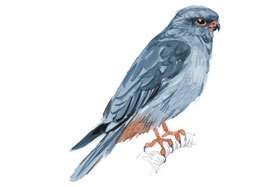 One of the mysteries of current migration patterns involves the Amur and Red-footed Falcons. They fly to South Africa from the Russian Steppes over northern India and through the Middle East. However, their return flights do not follow the same aerial pathway and ornithologists are perplexed as to how they get back to the Steppes. One theory is that they fly over the Indian Ocean and then over the Himalayas back to the Steppes.

The migration traffic is not only one way, with Eurasian and northern African birds heading into South Africa. A smaller number of birds migrate northwards during the South African winter towards the equator. These include many duck species, which regularly visit the tropical floodplains of southern Sudan, as well as the Lesser-striped Swallow.

Ken Newman believed that birds probably average around 240km a day during their migrations. Swallows are among the fastest fliers traveling over 370km a day. The bigger the bird the higher it flies - raptors travel at altitudes of over four kilometres above the earth's surface, while waders fly at heights of around three kilometres.

Simplistically, animals that migrate appear to have an internal compass that can chart the earth's magnetic field. They also appear to be able to navigate using the sun by day and the stars by night. This enables them to pinpoint, with an astounding degree of accuracy, how to get to a chosen destination - to the point where some migrants inhabit the same nests year in and year out.

It appears that migration is both a learned and inherited skill - within weeks of birth, juvenile birds manage to undertake long-distance migration and appear instinctively to know where to fly and how to meet up with their parents.

Yet another strange migration phenomenon is how birds can anticipate rainfall thousands of kilometres away. Some birds, such as the Black Coucal, Little Grebe*, Lesser Moorhen and Allan's Gallinule* as well as certain quails, appear to visit Kruger only during times of high rainfall.

The table above shows the average arrival date of some migrant birds in Kruger. They were recorded by consulting editor Ian Whyte during his residence at Skukuza between 1970 and 2002. He tracked the arrivals of this random group of migrants for over 30 years. He stresses that these are personal observations rather than a scientific study and merely indicate a general trend.