© Nigel Dennis
Human intervention has generally been beneficial for birding in the Park. For a start, the proclamation of the original Sabi Game Reserve in 1898 was a visionary act which created the nucleus of an enormous conservation area.

The subsequent consolidation of the Sabi and Shingwedzi Reserves into a single national reserve, the decision to actively encourage tourism and the more recent launch of the Limpopo Transfrontier Park, are all initiatives built on James Stevenson-Hamilton's vision and Paul Kruger's subsequent proclamation.

The introduction of tourism to Kruger in 1926 led to a profusion of birds around the camps, which provide easy feeding. Wide lawns and big trees next to river frontage and outdoor eating areas have led to the establishment of many bird populations within camps with each camp having its own birding personality.

Early waste disposal methods at Kruger were a major factor in boosting the Marabou Stork population over the past 50 years. These arch-scavengers took advantage of the open rubbish heaps situated near camps before modern waste procedures were implemented. Flycatchers have found easy pickings of their favourite meals off the radiator grills of cars in the camps. There has been an increase in the nuisance factor of hornbills, starlings, weavers and bulbuls, which jostle for scraps at the restaurant areas and picnic spots in the Park.

The construction of artificial water holes and man-made dams has also affected Kruger's birdlife positively. Far more waterbirds visit the Park than would have been the case had nature been left to take its own course. In many instances, entire local ecosystems have been changed. The construction of Engelhard, Kanniedood and Pioneer Dams in northern Kruger has infinitely improved bird-watching around Letaba, Shingwedzi and Mopani. 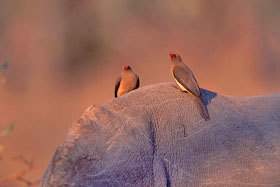 Oxpeckers are common in Kruger but rare almost everywhere else. Their numbers suffered a great decline with the introduction of dipping domestic stock as an antidote to ticks. Interestingly, they have reasserted themselves in southern Zimbabwe as commercial farming operations have been devastated by that country's controversial land reform policies. Oxpeckers particularly favour an association with buffalo and Giraffe, picking ticks off their hides and probing ears, noses and mouths for food.
There are two species of oxpecker - the Red-billed and rarer Yellow-billed. The former prefers hairier animals and the latter less hairy. They often work in parties and warn their hosts that they are coming with a loud, rattling cry. (See The Outpost)