© Brett Hilton Barber
The road to Shingwedzi (H1-6) divides the western mixed woodlands from the open savanna grasslands of the east. The Steppe Eagle and Lesser Spotted Eagle are often seen in summer in the Bowker's Kop area, while there are lots of rollers, Greater Blue-eared Starlings and African Grey Hornbills busy along the roadside.

The Mopane trees vary in size according to the richness of the soil. The road passes a series of pans, one of the better ones being Shidayangwenya, 8km from Mopani Camp. It is a long stretch of water amongst tall Mopane trees and often attracts elephants.

The Shingwedzi Road crosses the Tropic of Capricorn just north of Grysbok Pan. Theoretically, one is in the tropics north of this point, although the vegetation typical of central Africa only becomes apparent in the Luvuvhu River area. 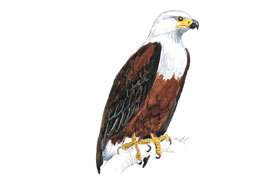 North of the tropical line, the H1-6 passes through intermediate Mopane with Apple-leaf trees and Leadwoods marking the watercourses. These trees are a favourite haunt in summer for the noisy Woodland Kingfisher. Burchell's Coucal and Natal Spurfowl* are usually seen from the road. As the terrain opens up halfway between Mopani and Shingwedzi, rollers begin to dominate the roadside.

The open grassland suits the Steppe and Tawny Eagles, while small flocks of White-crested Helmet-Shrikes are active, lower-level feeders in the pockets of woodland.

The main water hole along this road is Olifantsbad Pan which, like most of the pans along this road, becomes really interesting after good rains. Early summer thunderstorms result in millions of termites emerging from the ground, attracting a feeding frenzy of eagles, hawks and buzzards that gorge themselves on these high-protein delicacies.

North of Olifantsbad Pan, a small intrusion of gabbro thornveld marks the mini-escarpment between the Dzombo River catchment area and the Shingwedzi floodplains. The mopaneveld becomes visibly stunted as one moves into the eastern basalt plains. The grassland in turn gives way to mixed woodland as the road dips gently next to the Nkokodzi Stream into the alluvial floodplains of the Shingwedzi River system.

The floodplains are marked by a stark change in the geological variety of the rocks, which have steadily been deposited in the watercourses over millions of years of flooding. In summer the Southern Carmine Bee-eater provides a striking colour contrast to the green-brown bush.

The H1-6 closely follows the Shingwedzi River for 15 kilometres before Shingwedzi Camp. This is a very good birding drive, particularly in summer, when there's lots of avian activity among the large Leadwoods, figs and Apple-leaf trees that line the river. Closer to Shingwedzi there is an increase in the number of francolins and other game birds feeding in the grassy verges on the roadside.

Mopani to Shingwedzi via Shilowa (S50)

The S50 leaves the Nshawu watercourse (see Nshawu) and crosses the basalt flatlands of scrub Mopane. Common Ostrich* and other large game birds inhabit this lightly wooded savanna, which birding author Callan Cohen rates as one of the best grassland birding areas in Kruger.

The Kori Bustard, Black-bellied Bustard* and Red-crested Korhaan can be seen in the veld, while Swainson's and Natal Spurfowl* feed along the road edges. The S50 reaches the Lebombo just after the Tropic of Capricorn, which is marked by Shilowa Hill (382m). Shibavatsengele, Grootvlei and Nyawutsi are all interesting birding stops. The best birding on the road is north of Dipene where the S50 tracks the Shingwedzi River over 20km past Kanniedood Dam to Shingwedzi Camp.
See Letaba to Shingwedzi.Sabota Rap

The Sabota Lark (Mirafra sabota) can mimic up to 60 other bird species including falcons and guineafowl. It is one of the more common birds of the mopaneveld, with Roberts VII estimating more than 260 000 of this species in the Park. The Sabota Lark sings from a prominent perch and it has a long and rambling, melodious song, interspersed with the calls of other birds' whistles, buzzes and trills. It even mimics the sounds of a dove's wings flapping. The Sabota Lark forages on open ground and has been known to dig up grubs. It eats insects and grass seeds. Researchers believe it never drinks but gets all its moisture requirements from grasses. 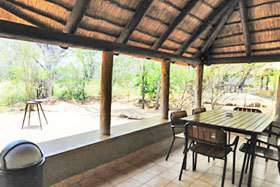 Where to stay in The North

The Kanniedood Dam stretch of the Shingwedzi river has the best birding in this part of the north. The 12 kilometre long waterway downstream from the camp can be accessed through a series of loop roads off the S50. There is lush riverine forest along the river's edge and mixed Mopane woodland makes up the surrounding bush. 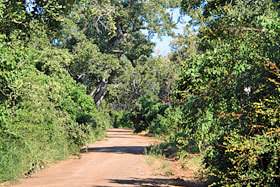 Kanniedood has magnificent riverside trees - enormous Ebony Jackal-berries and Sycamore Figs provide handy hunting perches for raptors eyeing their prospects along the watercourse. African Fish-Eagles swoop low over Kanniedood to catch fish which they then devour in the tree canopy or on the sandbanks. Study the tree canopy carefully.

The authors watched a Verreaux's Eagle-Owl* trying to raid an African Grey Hornbill 's nest in a huge Ebony Jackal-berry. The owl used its talons to try and pull down the mud-walled entrance of the hornbill's nest in a hollow branch, but abandoned its attempt when attacked by a noisy, flapping flock of male hornbills that arrived to defend the nesting female.

Generally the loop roads offer better birding than the Kanniedood Dam hide, which can be quiet if the water levels are low. The secretive Pel's Fishing-Owl has been seen on occasion in the tall riverine trees.

The sandbanks of Kanniedood should yield most of the storks and herons, Great Egret*, Blacksmith Lapwing*, Southern Pochard, Egyptian Goose, Three-banded Plover, White-faced and Fulvous Ducks and Common Sandpiper. The ducks are unconcerned about the crocodiles sunning themselves at the water's edge. They waddle nonchalantly within inches of those jaws but the crocodiles ignore them.

Listen out for the sweet sounds of the Red-faced Cisticolas which occupy the river forest fringes.Shingwedzi Camp

Shingwedzi is the largest of the northern camps. Its atmosphere reflects the rugged dryness of the north. It has all the amenities of the large camps and offers guided walks and drives at various times of the day.

Established Mopane trees dominate the medium-sized camp which sits close to the confluence of four river systems - the Mphongolo to the north, the Bububu to the west, the Shingwedzi that comes in from the south and the Mandzemba from the north-east. Although the mopaneveld itself is not a particularly rewarding habitat for birders, Shingwedzi is, due to the density of riverine woodland around these vast alluvial floodplains and the availibility of water.

Shingwedzi is a good camp for winter game spotting because the animals stay close to the water, but for birders, there's no beating summer when all the migrants have arrived and the riverine forests are alive with birds.

The Red-headed Weaver is very active in the restaurant area, jostling for scraps with bulbuls and starlings.

Shingwedzi specials are Bennett's Woodpecker, the Red-capped Robin-Chat* and African Mourning Dove. The Collared Palm-Thrush, first recorded in Kruger in 1995, has since become a summer visitor to the camp. The Village Indigobird* and Dusky Indigobird* are also Shingwedzi specials and there are regular sightings at sunset in the tall riverine trees near the camp gate of Verreaux's Eagle-Owl*. 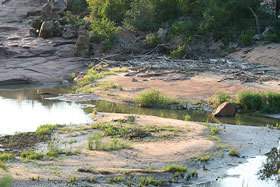 Red Rocks is an extended 50-km loop along the alluvial floodplains of the Shingwedzi River. It gets its name from the ochre-coloured Gubyane Sandstone in which the Shingwedzi has gouged a series of potholes. The Red Rocks Loop (S52) follows the river upstream into the Mopane woodlands. It can also be accessed via the main road to Mopani Camp (H1-6). Both routes pass through robust riverine forest where Red-backed Shrike, Woolly-necked Stork, Cape Glossy Starlings, hoopoes and a variety of kingfishers are found.

The Red Rocks route ends at the Tshanga get-out point unless one is going to Bateleur Camp. Tshanga is a deliciously isolated get-out point where one can clamber over the rocks around the site and take in the views over the Tshanga River and the mopaneveld to the south-east.
Next - Departure Dates
Best Birding Guide to Kruger Park
©2022 Siyabona Africa (Pty)Ltd - Private Tours and Safari