© Brett Hilton Barber
An alternative route to Shingwedzi, bypassing Mopani, is the S50 which leaves the Letaba Mopani Road (H1-6) just before the crossroads to Phalaborwa Gate (H14).

Letaba to Shingwedzi via Shilowa (S50)

This road initially follows the Nshawu watercourse past a number of wetland pans in the Mopane scrubveld (see Nshawu) and joins up with the Tropic of Capricorn Loop (S143) which skirts the Lebombo. Shibavantsengele (489m) is a viewpoint on the Lebombo near the ancient, iron-trading settlement of Shilowa. Look out for the Black-chested Snake-Eagle and the African Cuckoo in the Lebombo woodlands at Shibavantsengele.

The adjoining Shilowa Hill (382m) is on the site of an ancient elephant migration route between Kruger and Mozambique. Former Park head ranger Bruce Bryden discovered a secret cave near Shilowa that appears to have been extensively used as a storage den by various traders in ivory and precious metals during the 18th and 19th centuries. Stop at Grootvlei Dam just off the S50. It is a big expanse of water with interesting reed beds. There is a bird hide at Nyawutsi set in a secluded piece of woodland overlooking a small pool.

The S50 joins up with the Shingwedzi River at the old Dipene footbath and tracks the river for 16km before it reaches Kanniedood Dam (see Kanniedood Dam). 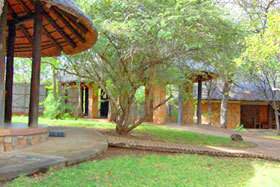 Where to stay Around Letaba & Shingwedzi