© Brett Hilton Barber
The road between Olifants and Letaba is one of the most scenic drives of the southern mopaneveld. Just after the H8 turn-off is an excellent stopping point overlooking the Olifants River on the west of the main road. 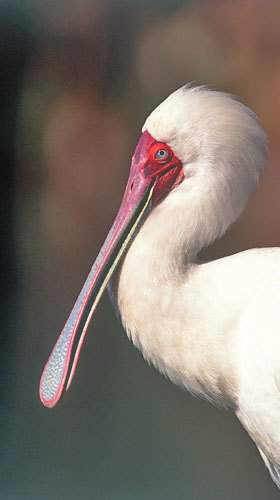 The road between Olifants and Letaba is one of the most scenic drives of the southern mopaneveld. Just after the H8 turn-off is an excellent stopping point overlooking the Olifants River on the west of the main road. There is a magnificent Sycamore Fig with lots of bird activity, and a number of Ebony Jackal-berries and Matumis closer to the water's edge. Look out here for the usual starlings and bulbuls, but also the Red-headed Weaver, White-crested Helmet-Shrike*, Groundscraper Thrush, Yellow-fronted Tinkerbird*, Southern Black Tit and African Grey Hornbill. This is a particularly good birding spot at dawn.

The five kilometres between the Olifants River Lookout and Shamariri Koppie (297m) is vintage Kruger. Shamariri is one of a number of north-facing sandstone hills that form the watershed between the Olifants and Letaba Rivers. The dense groves of woodland trees on the edge of the mopaneveld here are the ideal habitat for one of Kruger's finest singers, the Black-headed Oriole, which mimics many other birds with its liquid, bubbling call. It is often seen in tree-canopied woodland on the edge of the mopaneveld where it feeds on the caterpillars of the Mopane Emperor Moth (Imbrasia belina).

Along the H1-5 north, tree Mopane occurs on the lower contours and shrub Mopane and Apple-leaf dominate the broad upper plateau between Olifants and Letaba. The Lebombo range can be seen to the east. There is a reasonable chance of spotting the Kori Bustard along this drive. In summer, it is often followed by the Southern Carmine Bee-eater, which preys on insects flushed out by the large bird's feet.

Raptors commonly seen between Olifants and Letaba include the Lesser Spotted Eagle, Brown Snake-Eagle and White-backed Vulture, and the Black Kite, a rare Eurasian migrant not often seen in Kruger. 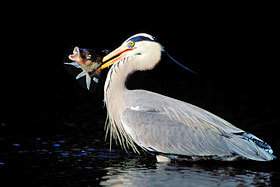 Herons are the largest group of true southern African waterbirds and these slender waders are found along the Park's main watercourses. The Goliath Heron (Ardea goliath) is a resident at most of the rivers and is associated with larger pools where it is often motionless, watching the water for fish, crabs and small reptiles. It is a solitary bird, and is often confused with the smaller Purple Heron (Ardea purpurea), which is more secretive and is usually only conspicuous in the late afternoon.

The Grey Heron (Ardea cinerea) is another common resident often seen patiently walking through shallow waters looking for food. The Grey and the Black-headed Heron (Ardea Melanocephela) appear quite similar - a good way of distinguishing them is that the Grey Heron is invariably associated with water while the Black-headed is usually seen in grassland away from water, feeding on rodents and small reptiles. 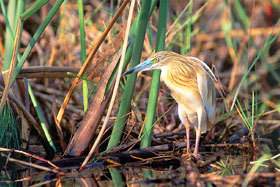 The Green-backed Heron (Butorides striatus) is one of the most common herons in Kruger, but is seldom seen because of its secretive nature and preference for heavily wooded riverine habitat and reed-fringed pools. Less common is the Squacco Heron (Ardeola ralloides), which favours the eastern areas of Kruger, particularly the backwaters of rivers where its buff colour is a good camouflage.

Letaba Bridge, four kilometres north of the camp, is a compulsory get-out point for any birder. Little swifts roost under the bridge. They are often hunted at sunset by Wahlberg's Eagle, which is also keen on the colonies of bats that are found there. The vast Letaba floodplains are usually dry, but there is sufficient water within the riverbed to support varied and interesting bird activity.

Among the species one should look out for from the bridge are the Blacksmith Lawping*, White-fronted and Chestnut-banded Plovers, Little Rush-Warbler*, Goliath and Grey Herons, Greenshank, Lesser Masked-Weaver, Little Bittern, Dusky Lark and the spookvoel - the Grey-headed Bush-Shrike. 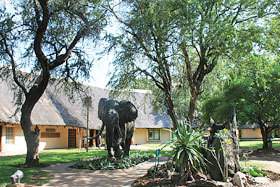 Letaba is usually a good birding camp because it is sitedon the Letaba River and has established, mixed woodland around it. It is renowned for its owls, which nest in the many Apple-leaf trees (Philenoptera violacea) in and around the camp. The Pearl-spotted and African Barred Owlets, African Scops-Owl and Barn Owl are all resident in the camp itself, while the Verreaux's Eagle-Owl can often be seen in the Letaba riverine bush late in the afternoon.

Letaba is a large camp offering a variety of accommodation, from camping to fully-equipped guest cottages. The camp sits above the broad floodplain of the Letaba, near its confluence with the Nhlanganini Stream. It can bake in summer and get uncomfortably humid, but it does have very cool river views from the walkway and restaurant. The deck outside the restaurant is an excellent bird-watching spot in the camp because it overlooks the river, which supports a variety of herons, storks and other waders, including the Greater Painted-snipe.

From time to time Marabou Storks descend onto the trees along the river bank. Red-headed Weavers nest in front of the restaurant and there are often flocks of Red-billed Oxpeckers that fly in during the late afternoon to settle in the Southern Lala-palms. European Nightjars nest in the palms near the restaurant.

The Letaba River is one of the main breeding localities in Kruger of the Goliath Heron, so this large and elegant wader is a camp regular. Birds associated with Letaba are the Southern Black and Ashy* Flycatchers, Greater Blue-eared* and Cape Glossy Starlings*, Green-capped Eremomela, Bearded and Golden-tailed Woodpeckers and African Mourning Dove. The Red-capped Robin-Chat likes the dense bush along the river - it can imitate up to 40 other bird calls and incorporates these into its own melodious repertoire.

The deck overlooking the river is a good place to improve one's identification of swifts and swallows. Depending on the time of the year, the Lesser Striped, Grey-rumped and Pearl-breasted Swallows, the Brown-throated Martin and Little and Horus Swifts can be seen.

The Horus Swift, which nests in holes in the river sandbanks, is easily confused with the White-rumped Swift, which is more common in Kruger. Both species are gregarious and are found in flocks thats spin and wheel, often noisily, chasing other birds in what is termed 'circus' flight. A rare sighting recorded at Letaba in 2001 was of a White-headed Saw-wing, a tropical swallow-like bird that is usually confined to the DRC and north-east Africa.

Other historic sightings at Letaba were six Crowned Crane by ranger Gus Adendorf on February 15, 1972, and a Buff-spotted Flufftail that was caught by a dog in a ranger's garden in May 1970.