© Brett Hilton Barber
Engelhard Dam provide one of the most sublime birding experiences in Kruger. Close to Lebombo and the Mozambique coastal plains, the tranquility of the bush stands in stark contrast to the tension of the mid-1980s when this part of the park was the epicenter of the elephant-poaching war between game rangers and protagonists in the Mozambique civil war who were engaged in the lucrative sideline of ivory smuggling.

The best bird-watching is from the northern banks of the dam (along the S62) as the floods of 2 000 created new red beds that block views over the water from the southern bank (along the S46). Nonetheless, the S46 south of Letaba is reputed to be one of the best places to spot the Collared Pranticoles* that are believed to breed in the reeds close to the road during summer.

The species had been unknown in the Kruger before the mid 1980s when it was first recorded at the Engelhard Dam. Since then, it has become more of a regular summer visitor from its breeding grounds in the Iberian Peninsula and may be overwintering in Kruger too.

Two main birding spots on the S62 (off the H1-6) are Matambeni hide and Engelhard Dam wall. 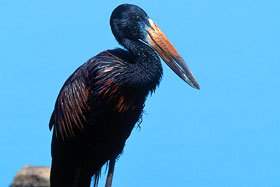 Matambeni looks out over a broad stretch of the Letaba river and the canopy of the thick riverine bush. The summer viewing from the hide usually yields a plethora of waterbirds, including the uncommon Black Heron* - with its distinctive hunched-wing fishing technique. The Goliath, Grey and Squacco Herons, African Openbill*, African Spoonbill, Black-winged Stilts*, Great and Little Egrets are more commonly seen along the river bank.

The African Spoonbill in particular has benefited from artificial permanent water sources in Kruger and its numbers have grown. It favours shallow wetlands and often is seen alongside crocodiles and hippos, waiting for them to flush small fish or insects into the open. Birds in the woodlands around Matambeni Hide may include Burchell's Coucal, Jacobin Cuckoo, Southern Caramine and European Bee-eaters, Common and Blue Waxbills and the Tawny-flanked Prinia. The African Fish-Eagle and African Hawk-Eagle are often overhead - and on rare occasions the Osprey has been seen.

At the Engelhard Dam wall further down the S62 there are usually lots of swifts and swallows, including the Horus and White-rumped Swifts, Sand Martin and Lesser Striped Swallow. Three-banded Plovers are usually seen on the sandbanks below the dam wall. They feed comfortably alongside the Water Thick-knee*, African Pied Wagtail, Goliath Heron and the Wood and Common Sandpipers. Among the reeds are African Jacana and the occasional Green-backed Heron. Unusual sightings here include Kittlitz's Plover, and a July occurrence of a flock of 16 Great White Pelicans - Pelicans are not seen as often in the Park as they are vagrants to the area.

The Engelhard Dam Lookout from the Lebombo, halfway up the Longwe Koppie (480m), does not have particularly satisfying views or birds.

Night birds are often associated with superstition. In Shangaan folklore, the Fiery-necked Nightjar acts for the sangoma, delivering his or her spells to people sleeping in their homes. The bird's sharp whistle, distinct from its normal call, indicates that the spell has been successfully delivered. The Fiery-necked Nightjar is not necessarily seen as a purveyor of bad intent but Shangaan traditionalists caution that if a bird keeps coming back to a particular homestead, the matter should be taken up with the clan elders.

Why the Owl Hunts Only at Night 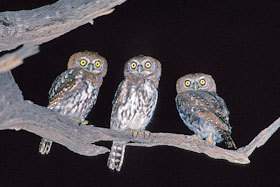 There is an African legend that explains why the owl is only seen at night. Once long ago, when the King of the Birds died, the other birds, in their despair, asked the jackal to choose a new king for them. The jackal said that the bird who could fly the highest would be the new king. The vulture was sure that it would be him, but as he prepared to take off he didn't notice a little tinktinkie - Zitting Cisticola* in today's terminology - which jumped onto his back and hid under his feathers.

Unfortunately for the owl, he fell asleep and the tinktinkie managed to escape. As it is with the fickle ways of the wild, the birds forgot about the tinktinkie and turned instead on the owl, pecking him and beating him with their wings. To this day, the owl has not been forgiven and whenever one appears in daylight hours he is mobbed by other birds and therefore hunts only at night.

Mingerhout (Afrikaans for the shiny-leafed Matumi tree which grows here) is a major dam on the Letaba River at the foot of Hatlani Hill (290m). It is approximately 2 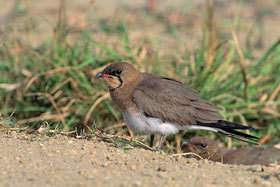 0km from Letaba Camp on the S47, whichfollows the river and winds in and out of the surrounding mopaneveld. There are about 12 loops along the river road with attractive views over the water and the riverine bush, which supports a diversity of birds, among them the Ashy Flycatcher* and the Emerald-spotted Wood-Dove.

The Woodland Kingfisher is very active and noisy in summer, and the Giant Kingfisher hunts from branches hanging over the river. In fact there are times where there seem to be more kingfishers than impala along the Letaba. Another summer sighting is that of the Great Egret*. These birds often stand like sentinels in pools at half-kilometre intervals down the river. During their December breeding season, their bills turn from yellow to black.

Mingerhout is a long dam, stretching back at least a kilometre upstream from the dam wall. Blacksmith Lapwings* are usually found around the water's edge. There are often good raptor sightings here. The African Fish-Eagle, African Hawk-Eagle, Bateleur and Tawny Eagle are all resident hunters along the river, while the Yellow-billed Kite is a common summer visitor. There are usually lots of hippos and crocodiles at Mingerhout. One aquatic wader who has adopted the crocodile as a bodyguard is the Water Thick-knee*.

It builds its nests close to the great reptiles' lairs. The crocs don't seem to bother them while at the 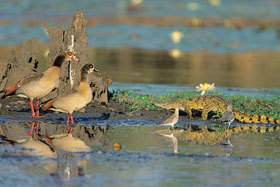 same time keeping away one of the Water Thick-knee's* main predators - the water monitor that feeds on its eggs and nestlings. In turn, the Thick-knee* acts a sentry for the crocodile, warning of any impending threat to neighbourhood peace.

Ostriches have adapted to a flightless life by being able to run very fast. Even a month-old ostrich chick has a chance of outpacing a lion - it can dash for safety at a speed of up to 56km/h. Ostriches are believed to have an ancestral association with the South American Rhea dating from the time the ancestors of both species occupied the ancient supercontinent of Gondwanaland. The link is that identical bird-lice is found on them, a very specialised species unlikely to have evolved on separate continents.