© Brett Hilton Barber
Phalaborwa Gate is the main access point to central-northern Kruger. Phalaborwa town has a mining tradition that goes back almost 1 000 years when it was colonised by Sotho speakers from what is today Botswana. Its name literally mean's better than the south' because of the large deposits of iron ore, which made it a major metalworking centre of the southern African Iron-Age.

The area around Phalaborwa Gate is mixed bushwillow and Mopane woodland with mixed grazing. The drainage lines have the sweetest grass so animal activity is usually confined to the lower contours, which are marked by tall Leadwoods. The elevated contours, have a combination of Silver Cluster-leaf and acacia woodland within the mopaneveld. Wild dogs are often seen on the roads in the vicinity of Phalaborwa Gate.

The closest get-out point to Phalaborwa Gate is Sable Dam, a rather bare, open expanse of water with several dead trees, seven kilometres inside the Park. The bird hide here is available as a sleepover (see Sleep-over Hides). It is a reasonable viewing spot for braver waders, although the lack of grass cover makes it too exposed for many other waterbirds. African Fish-Eagles nest nearby. Waterbirds such as Little Stint, Curlew and Wood Sandpipers sometimes make their appearance along the mud flats at Sable. Sable antelope are in the vicinity, but are seen less regularly than they used to be.

The dirt road from Sable Dam to Masorini skirts the bouldered landscape around Vudogwa Hill.

In a travelogue written in 1861, the Portuguese trader Fernandes das Neves mentions his interest in the nest of the Grey Penduline-Tit which he found near what is now Phalaborwa Gate. The nests are cleverly disguised to look like spider webs and have a cunning, false entrance to confuse predators. Indeed, there is a symbiotic relationship between the Grey Penduline-Tit and the social spider that may go back millions of years. The birds protect the spiders from other birds and the spiders provide the camouflage.

Grey Penduline-Tits are reasonably common in broadleafed woodland in Kruger, including the mopaneveld, and are often found in feeding parties with eremomelas, Willow Warblers and White-eyes. Just north of Letaba camp on the S95 das Neves carved a Portuguese cross on a giant Leadwood that can still be seen today.

At the foot of the weathered, granite boulders of Vudugowa Hill is the Masorini Picnic Site which has a small archaeological museum and restored Iron-Age village. Masorini was inhabited from around the 11th century by the Majola, a sub-clan of the baPhalaborwa tribe, who had a long metalworking tradition.

It was one of a number of settlements that were part of a centuries-old trading network between the southern African interior, the lowveld and the Mozambican coast. The Majola smelted and forged a variety of iron weapons and farming implements, which they traded with other communities who ranged from San hunter-gatherers to Shangaan speakers from coast.

The Majola would have seen the same kind of birds in the surrounding rocks as we do - for example the Mocking Cliff-Chat jumping from boulder to boulder and the Red-headed Weavers nesting in the nearby woodland trees. Red-winged Starlings hawk insects from the upper rocks of the Vudugowa koppie, while the Black-chested Snake-Eagle is sometimes seen circling over the rocks.

Small flocks of Cinnamon-breasted Buntings* and Yellow-throated Petronia* are often active in the lower strata of the surrounding bush. The Great Spotted Cuckoo, Familiar Chat, Blue Waxbill and Blacksmith Lapwing* are commonly seen at Masorini. Ian Sinclair and Ian Whyte have noted that Verreauxs' Eagle* is periodically seen here. Guided tours of the archaeological site take place every half-hour during the day, Tuesdays to Sundays.

The main road between Phalaborwa Gate and Letaba (H-9) follows the broad, low ridge between the catchment areas of the Olifants to the south and the Letaba to the north. There are thousands of termite hills along this road. Termites emerge after summer rainstorms and provide a rich source of protein for raptors - particularly the Steppe, Lesser Spotted and Tawny Eagles.

Hundreds of raptors may gather to feast when the termites emerge, running around on the ground after the insects. The Brown Snake-Eagle is a common sight along this road, and during times of increased rodent activity Black-shouldered Kites make their appearance.

From Shilawuri Hill (414m), a major navigational landmark during the Iron-Age trading era, the H9 follows the Nhlanganini River through a small, intriguing patch of sandveld around Nhlanganini Water Hole. There is a profusion of plant species in this small ecozone, which marks the transition point between the mixed Mopane woodlands to the west and the Mopane shrubveld to the east. This is a good environment for the Secretarybird. 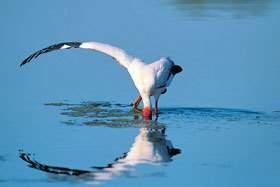 Shimuwini Dam at the camp is renowned for its waterbirds and its Baobabs. Indeed Shimuwini is Shangaan for 'Place of the Baobabs' and there are some wonderful, ancient specimens of these trees. Waterbirds are a relatively recent phenomenon in this usually dry part of Kruger. The construction of the Shimuwini Dam changed the entire ecosystem of the area, introducing a permanent water source into the western mopaneveld.

Among the birds attracted to the dam are the White-backed Night-Heron, Greater Painted-snipe and Pel's Fishing-Owl, while Collared Pratincoles* have been seen on occasion. The African Cuckoo and Eurasian Golden Oriole* are also birds associated with Shimuwini, while there are scores of cisticolas and warblers in the surrounding grasslands. Shimuwini has 15 chalets and a central lapa that overlooks the Letaba River and the dam. The camp offers bush drives and guided walks. Firewood and ice are on sale at the camp but there is no shop. There are no power points in the chalets. 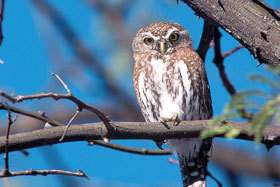 Boulders Bush Lodge is a private camp that takes its name from the surrounding granite koppies. It's an excellent birding spot because the five thatched chalets are on stilts. Each has its own deck at tree-canopy level with views over the surrounding bushwillow and Mopane woodland. The peaks of Ngodzi (472m) and Tsale (450m) can be seen from the camp, which is next to a stream and near a water hole. The Lodge is only available as a block booking.

It has no electricity - all lighting is solar powered and cooking is on gas. It offers game drives and guided walks, but these have to be arranged when the initial booking is made. The Pearl-spotted Owlet's high-pitched cry is regularly heard at Boulders. Other Boulders birds include the Grey-headed Bush-Shrike.

The tarred Phalaborwa-Mopani road (H14) takes one through some of the main winter grazing grounds of the big Kruger herds. There are often zebra, wildebeest and buffalo grazing on the roadside past the imposing Shikumbu Koppie (494m), which like other hills in the area, was occupied by Iron-Age, Sotho-speaking metal-forgers. The road follows the Ngwenyeni River through the mixed bushwillow woodlands. There are a series of loop roads off the H14 where the Saddle-billed Stork, other large waterbirds, the Hamerkop and a variety of kingfishers may be seen.

Traditional healers believe that parts of the Hamerkop are effective muthi to exorcise one's house of any bad spirits or negative energy. The African Hoopoe, which occurs throughout Kruger, is often seen here. The Letaba River crossing is a good birding spot. Further north, the H14 is less rewarding until one gets closer to Mopani.