© Brett Hilton Barber
Afsaal sits on a great horn of gabbro, a form of basalt, which curves across south-western Kruger from Lwakahle Concession along the Voortrekker Road, past Ship Mountain into the upper Biyamiti catchment area and on to Phabeni. Unlike the granite around it, basalt supports nutritious, year-round grazing and has far fewer trees.

This sweetveld finger into the sourveld always attracts game and there is usually some animal action a few kilometres south of Afsaal and at the junction with the Voortrekker Road (H2-2). The Common Ostrich* is a regular sighting here. 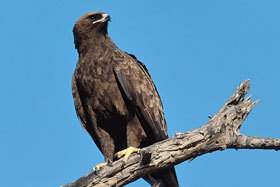 Afsaal is a good daytime stop-off. It was redeveloped after it burnt down in 2003 and is a convenient picnic spot with a good shop, fast-food outlet and braai facility. The thick clusters of Red Ivory around the picnic site are dwarfed by an enormous Ebony Jackal-berry astride an ancient termite mound. The braai area closest to the stream is the most rewarding birding spot at Afsaal.

There is regular traffic of mousebirds, bulbuls and starlings as well as at least three barbets - the Crested, Black-collared and Acacia Pied Barbets. In summer, the noisy Jacobin Cuckoo can often be heard in the riverine bush on the southern edge of the picnic site. Staff at the shop report frequent sightings of the African Scops-Owl during the day at Afsaal.

Among the fruit-eating birds attracted to the reddish fruit of the Red Ivory are African Green-Pigeons. Small flocks chamber along the tree branches, sometimes hanging upside down to get at the fruit. Other birds seen at Afsaal include the Brown-headed Parrot and Grey Go-away-bird and Purple-crested Turaco*. Look out for the spidery, cocoon-like nests of the Grey Penduline-Tit in the bush on the perimeter of the Afsaal picnic site.

The brilliantly red-tipped feathers of the Purple-crested Turaco* are significant in Swazi custom. According to traditional dress code, only princes from the royal family may wear the feathers in their headgear. There are an estimated 4 000 Purple-crested Turacos* in Kruger, with populations concentrated in the denser pockets of riverine woodland along the Sabie, Crocodile and Luvuvhu Rivers. Look out for the flash of red underwings as they fly from tree to tree uttering their unmistakable, descending ko ko ko ko ko ko call.

Bush-Shrikes often take on prey much larger than themselves. Roberts VII records a Grey-headed Bush-Shrike killing a one metre long Bird Snake. The Spookvoël, meaning 'ghost bird', as it is sometimes known, took 45 minutes to kill the snake which it then only partially ate. 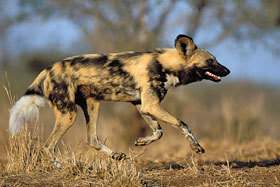 Game birds are fair game for most predators. Lions, leopards, hyaena and the bigger raptors are all partial to a guinea fowl or francolin from time to time. But there is an interesting exception. Wild dogs appear to have an inter-dependent relationship with the Crested Francolin. Research in Kruger in the late 1990s by Duan Biggs and Janet Webb (Africa - Birds and Birding, March 1999) suggests that wild dogs use Crested Francolin to keep their dens clean and to keep watch for danger.

When wild dogs are breeding, the alpha female stays in the den to rear the pups and depends on other dogs in the clan to bring back food. This they do by gorging themselves at the kill and then regurgitating the remains of the takeaway back at the den. This is obviously a messy business. Biggs and Webb found that wild dogs were completely tolerant of Crested Francolin, which came right into the dens to clean up scraps of meat. Wild dog pups even appeared to treat the francolin as their playmates.

Biggs and Webb believe that the Crested Francolin play a watchdog role for the wild dogs, wandering around in the bush near the dens and sounding the alarm if there is danger. Wild dog had a moderate tolerance for the Southern Yellow-billed Hornbill and Greater Blue-eared Starling. Bateleur and Hooded Vultures often perch in trees around wild dogs dens hoping to pirate bigger scraps of food than the other birds can manage. 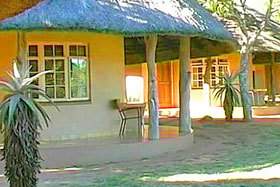