In summer, these hills generate thermal updrafts, which help lift raptors such as the Brown Snake-Eagle and African Hawk-Eagle high into the air. Because of the high rainfall (760mm per annum), hot subtropical temperatures and sharp differences in the altitude of the landscape, the area has a great diversity of plants and animals and includes many of Kruger's rarest bird species. 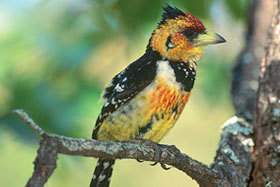 The S110 is a good game and birding route as the road runs along the ridges of grassland offering good views over the mixed broadleaf woodland and the sweetveld valleys of the southern biome. The lower valleys and drainage lines have the familiar Kruger watercourse trees such as the Ebony Jackal-berry and Tamboti, and there are plenty of bushwillow species and Magic Guarri. The upper slopes of the koppies have trees that are not usually associated with Kruger such as Matumis, Zulu Milkberries and Lowveld Chestnut (Sterculia murex).

Birds to look out for along this stretch of road in summer are the Red-backed Shrike and Rock Kestrel. There are lots of buffalo in the Malelane area and therefore flocks of Red-billed Oxpeckers are common.

The S110 winds through acacia woodland valleys ringed by Kruger's highest mountains. To the south is the highest peak - Khandzalive (840m), to the east is Maqili (674m) which is almost on Kruger's border, to the north Matjulu (627m), and to the west Tlhalabye (630m). There's always a good chance of seeing an unusual raptor along this road. Most common is the Bateleur, but there are occasionally more unusual sightings such as the Jackal Buzzard, African Crowned or Booted Eagles.

The birds in this area have a predilection for mountainous habitats - typical are the chats which perch prominently on the granite boulders and forage in the bush below. The Familiar Chat and Mocking Cliff-Chat* occur in the wooded koppies around Berg-en-Dal.

The rocky hills are also a favourite habitat of the Red-winged Starling which nests in loose colonies on the cliff faces. They are aggressive defenders of their territory and will mob raptors that come too close. They appear to have a particular dislike for that specialist nest-raider, the African Harrier-Hawk*. The Cape Glossy and Greater Blue-eared Starlings are found here.

The Cinnamon-breasted Bunting* and Golden-breasted Bunting, recognisable by their distinctive striped heads, can be seen on bare, rocky outcrops on hill slopes. The hills have many Red-leaved Figs which attract a host of birds during their summer fruiting season. Among these are the Purple-crested Turaco*, African Green-Pigeon and Dark-capped Bulbul*.

Many types of cuckoo are regular summer visitors to Berg-en-Dal. Among them are the Red-chested, African and Diderick Cuckoos. Sunbirds are also plentiful here - including the Scarlet-chested and White-bellied and occasionally the Amethyst Sunbird* whose range in Kruger is restricted to the higher altitudes of the south-western foothills.

Other Berg-en-Dal specialities are the Blue Waxbill, African Firefinch*, the noisy Brown-headed Parrot, and the Grey Tit-flycatcher. The robins that can be heard - and often seen - are the chattering White-throated Robin-Chat* and the musical White-browed Robin-Chat*. The two Bush-Shrikes that frequent southern Kruger, the Orange-breasted and Grey-headed Bush-Shrikes both occur at Berg-en-Dal. Game birds that can be seen in the camp are the Natal Spurfowl* and Crested Francolin.

The African Hawk-Eagle is a raptor closely associated with Berg-en-Dal.

Malelane is a small camp on the banks of the Crocodile River just over three kilometers from Malelane Gate. It takes its name from a Swazi regiment stationed at the river crossing during the mid - 18th century, safeguarding King Mswati I's northern Boundary. It has five small huts with a communal dining area and ablution facilities, and a small camp site set among tall trees. The trees and camps proximity to the Crocodile River make Malelane a good birding camp although the development on the other side of the river does compromise the bush experience.

Among the shade trees are Weeping Boer-beans and Sausage-trees which attract a variety of fruit-and insect-eating birds when they flower in spring, including the Crested Barbet and African Green-Pigeon. There are plenty of sunbirds at Malelane attracted to the hyacinths, aloes and large thorn trees. No day visitors are allowed. The nearest shop is at Berg-en-Dal six Kilometers away. Malelane Camp offers early morning and evening game drives and walks. 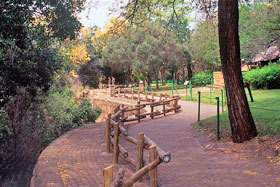 Berg-en-Dal is a large camp built on the Matjulu watercourse within the protective ring of the Malelane mountains. The large amount of natural bush in the camp is conducive to birding. It has a small, pleasant dam in front of it where the African Fish-Eagle often sits on the dead trees protruding from the water.

The best Berg-en-Dal Camp birding experience is to do the wheelchair-friendly Rhino Walk around the camp perimeter.

The gentle, hour-long walk beneath the tall trees that line the Matjulu River is punctuated by a series of interesting, educational artifacts. There is a plaque here to the memory of junior ranger Charles Aldridge Swart who was killed by a leopard further down the river in 1998. Look out for Giant and Pied Kingfishers flying down the river and African Jacana in the reed beds.

The Giant Kingfisher eats mainly crabs and fish up to 20cm long. Like other kingfishers, it seizes its prey from the water, takes it back to its perch and beats it to death before eating it. In West Africa, Giant Kingfishers are known to fly a short distance out to sea to fish, but they always bathe themselves in fresh water afterwards. 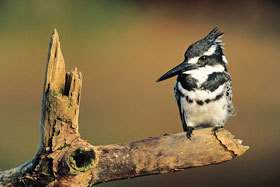 Matjulu Loop is rich in terms of botanical diversity. The road goes through dense woodland with pockets of grassland in the catchment area between the rugged mountains. Knob-thorn Acacia and Black Monkey-thorn dominate the low-lying areas of the south. Among the other trees in the woodlands are the Mountain Fig, Mountain Kirkia, Cabbage-tree and Jacket-plum, Broad-leaved Coral-tree and Wild-pear Dombeya. Because the Wild-pear carries a high population of caterpillars in spring, it is a magnet for cuckoos.

The higher slopes have the same hardy plants found on the Lebombo - the Kudu Lily, Baboon's Tail, Barberton Daisy, Rock Aloe and Lebombo Aloe. The Amethyst Sunbird* may be seen at the higher altitudes - it is not usually found in the Kruger lowveld.

Matjulu Water Hole is the main water hole in the extreme south-west of the Park. There's no surface water other than a small concrete dam, but one's patience may be rewarded if one waits and watches. Birds associated with the Matjulu catchment area include the African Green-Pigeon, Familiar Chat, Golden-breasted Bunting, Grey-headed and Malachite Kingfishers, while a late afternoon drive may throw up a sighting of a Freckled Nightjar or Spotted Eagle-Owl, both of which nest in the rocky outcrops of the surrounding hills.

The Steilberg Loop (S120) gives one a flavour of the south-western foothills, with good views over mixed woodland and grassland. There are often noisy birding parties in the more open woodlands of the higher slopes. Although the S120 can be a reasonable birding drive it does not have a good reputation for game-spotting. 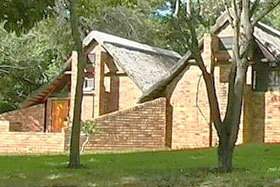 There was high excitement amongst birders at Berg-en-Dal in 2004 when the Orange-winged Pytilia* was recorded for the first time in southern Kruger by bird expert Duncan McKenzie on 24 August. Sightings of this rare species have been confined to a few occasions in the north and this appears to have been the first time this little bird has traveled so far south. A male and two females were observed drinking at the pool in front of the camp.
Next - Departure Dates
Best Birding Guide to Kruger Park
©2021 Siyabona Africa (Pty)Ltd - Private Tours and Safari