© Brett Hilton Barber
Numbi Gate is the closest Kruger gate to White River, and the portal to one of the most beautiful landscapes in the Park. Dramatic granite domes jut out of the rolling hills which are covered with forests of Silver Cluster-leaf and Kiaat Bloodwood. There are sweeping views over the lowveld plains.

The high altitudes and good rainfall ensure there are often bird species around Numbi not usually associated with the lowveld - for instance, this is the only place in Kruger where the Red-throated Wryneck has been recorded. Look out also for the Yellow-fronted Tinkerbird, Amethyst Sunbird* and African Cuckoo Hawk. When approaching Numbi just before the gate closes, avoid the the Freckled and Fiery-necked Nightjars along the main road from Pretoriuskop.

Raptor of the Forest Fringes 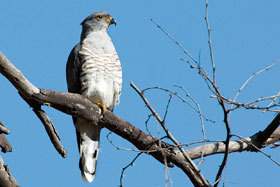 A Pretoriuskop are special is the African Cuckoo Hawk. It perches within the canopy in tall, woodland trees and is best identified by its broad chest bands and its crested head. Its call is a whistling :tickey to tou." One quarter of its diet consists of chameleons, its favorite being the common flap-necked chameleon (Chameleo dilepsis)