© Albert Froneman
Kites are small to medium-sized raptors, diverse in shape and size. All have relatively long wings and are expert fliers.

This is a hard one for Kruger birders to accept, particularly as the 'old' Yellow-billed Kite is a common summer visitor, while the 'old' Black Kite is a Eurasian vagant, rarely seen in the Park.

There has been an understandable outcry and it would seem that this debate is far from over. For the sake of clarity we have decided to differentiate between the two kites, and while not disputing their genetic similarity, the entrenched common names of Yellow-billed and Black Kites will remain the same.

The Yellow-billed Kite is one of the first migrants in Kruger, often arriving in August before the start of the rainy season. It departs after the last summer rains, which are usually in March. It is graceful in flight, and capable of bursts of surprising speed.

Its distinctive V-shaped tail gives it high-precision manoeuvrability when chasing prey - it can catch insects in its talons in mid-flight. There are stories from west African markets of the Yellow-billed Kite's ability to seize food from a pot being carried on a woman's head without her being aware of the theft. It is unperturbed by human activity and often nests at water sources near rest camps.

Like many other raptors, the Yellow-billed Kite relies on termites as a major food source. Scores of them will gather to feed, along with species such as Lesser Spotted and Steppe Eagles, when the insects emerge from the ground. The kite grabs the termites with its talons and eats them in flight. It is an opportunistic feeder with a diverse diet ranging from puffadders to fish.

It has also been seen gathering in large numbers in November and December during impala lambing season. The birds circle above the impala herds and descend to pick up the afterbirth rather than attack the newborn lambs.

If the Yellow-billed Kite was human it would have a long criminal record! It is a daring avian highway robber that steals food from other birds. Peter Steyn relates several incidents of having witnessed this - once two Yellow-billed Kites collaboratively attacked an African Fish-Eagle, forcing this big raptor to abandon its meal, while on another occasion they took a 15-cm barbel out of the beak of a Woolly-necked Stork.

It is also feeds on carrion, and although it arrives early at a carcass, it depends on other birds with stronger beaks to rip open the skin before it can eat. Perhaps for this reason it has the reputation of being a roadkill raptor of note. Many Yellow-billed Kites become roadkill themselves - vehicles are a leading cause of death. The oldest, ringed Yellow-billed Kite was 23 years old. 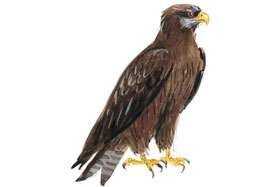 Opportunistic hunter, pirate and scavenger with a broad diet; particularly fond of termites and other insects but eats whatever it can find - rats, birds, snakes, fish, frogs, roadkill and carrion.

Throughout the Park in summer; large numbers in the central Park.

The Black-shouldered Kite is a small, graceful raptor and the most voracious eater in the raptor family. It needs to consume up to 25% of its body mass every day - that is the equivalent of about two mice. This means each bird probably kills around 700 mouse-sized animals a year. 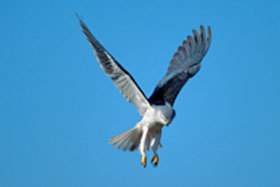 Now, Roberts VII estimates there are about 100 000 Black-shouldered Kites in southern Africa, so if we assume each bird takes two mice a day, that adds up to about 70 million mice being consumed by this species alone every year. Think of how many mice there are out there that are not being eaten!

Although the Black-shouldered Kite is perhaps the most common South African bird of prey, it does not always have much of a presence in Kruger. It prefers the highveld grasslands probably because prey is easier to see than in the more densely wooded lowveld.

Its appearance in the Park is linked to increases in the local rodent population. Black-shouldered Kites are solitary hunters by day, yet often roost communally at night. They usually spend between four and 10 hours a day in flight, but also often hunt from a perch.

One of their characteristics is to hover (air-perch) in one place above the ground searching for prey. Black-shouldered Kites range widely. The longest range so far recorded was that of a bird ringed in the former Transvaal and recovered in northern Mozambique, 915km away. Another bird ringed at the same time was recovered in the opposite direction - in the Cape, 645km away. 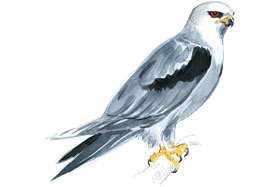 Over eighty percent of its diet consists of mice and other similar sized rodents; also preys on doves, lizards and insects.

Mostly in the open grasslands of eastern Kruger and in the west around Orpen.

The African Cuckoo Hawk is an unobtrusive hunter, avoiding open areas and sticking to the fringes of dense woodlands and gallery forests. It flies leisurely from tree to tree and then perches, silent and motionless, for long periods of time under thick cover, scouring the ground for prey. One of its favourite foods is the chameleon but it has a varied diet.

It seems to be restricted mostly to the north and south-west, but is also often seen in the thicker terminalia woodlands around Pretoriuskop. It appears to disperse over large areas during winter. It has a plaintive, three-note whistle that sounds like tickey to tou . Like many of the smaller raptors it is extremely skillful in negotiating the dense forest canopy in its search for prey. 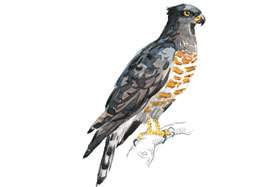 Most records are from the Luvuvhu, Limpopo and Sabie Rivers, also in south-western foothills around Pretoriuskop. 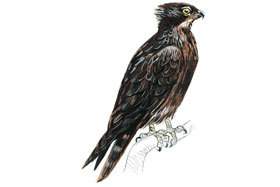 Most common in the north, particularly around Pafuri, Punda and Letaba where there are large resident bat populations.

There are very localised populations of Bat Hawk in Kruger - mostly in the north - so it is not often seen. It also may be an altitudinal migrant coming down to the lowveld from the escarpment in winter. As its name suggests, it lives mostly on bats so it is found where they are - moist woodland in river valleys, around Baobabs or next to cliffs.

The Bat Hawk sleeps during the day - when bats sleep - and becomes a very active hunter at dusk when bats emerge. Although it has an almost lazy flying style, it is a skillful hunter determined in its pursuit of prey. Bat Hawks are capable of eating a bat every three minutes and will often consume their entire daily food requirement within 20 minutes to half an hour.