Goshawks and sparrowhawks are small to medium-sized raptors found usually in denser woodland. Their shorter wings give them greater manoeuvrability through tree canopy. They often catch other birds in flight. 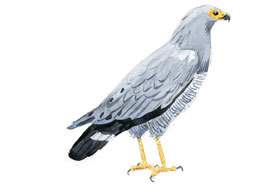 The African Harrier-Hawk (Gymnogene) is a specialist nestling raider and appears universally hated by other birds. There are an estimated 1 000 pairs in north-eastern South Africa, with most concentrations in the Waterberg and Kruger and in the neighbouring Limpopo National Park.

It is often seen hopping about in the tree canopy or on cliff faces, flapping its wings for balance as it grips on vertical surfaces looking for holes in trees and rock crevices. Its legs bend backwards so that it can maintain an upright balance while clinging to a tree trunk. It methodically inspects cavities, guided by the squeaking of baby birds and then sticking its beak or foot into the hole to grab its prey.

It frequently raids weaver colonies, hunts for plover and duck eggs in sandbanks, and may meticulously inspect old Hamerkop nests for food. It also paces along the ground examining holes in the earth for eggs, frogs and small mammals. When it flies low over the bush, it is often mobbed by other birds protecting their nests.

This harrier-hawk is a highly territorial, monogamous bird often involved in aggressive encounters with other raptors. When excited, its yellow face flushes red. Courtship displays can be astounding with pairs touching claws in mid-air and then falling backwards in dramatic swoops. Its call is a weak, high-pitched suuuu eee ooo whistle. 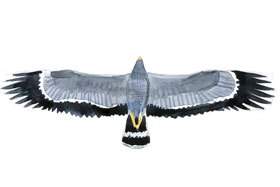 Nestlings and eggs from a wide range of birds including herons, plovers, weavers, drongos, swifts and swallows; also snakes and lizards, squirrels and frogs.

It is seen throughout the Park where there is mixed savannah woodland near rocky wooded hills, ravines or kloofs, particularly in Lebombo. 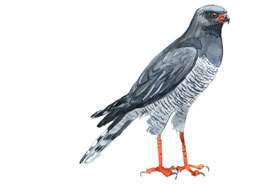 There are about 400 pairs of Dark Chanting Goshawks in north-eastern South Africa, and most of these are resident in Kruger. This bird is associated with the eastern bushveld, unlike its counterpart the Pale Chanting Goshawk, which prefers the arid Karoo and western South Africa. It is equally at home in the mopaneveld of the north and the mixed Marula and Knob-thorn savannah of the south.

It perches conspicuously on the branch or the ground and can move off with surprising speed. It has a diverse diet but concentrates mostly on lizards. The Dark Chanting Goshawk is known to follow honey badgers and Southern Ground-hornbills, which flush prey from their path through the bush. It is silent except in breeding season. Some of Kruger's Dark Chanting Goshawks may migrate to Zimbabwe in winter. 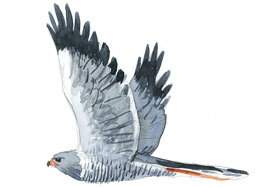 Mostly lizards and small snakes; small mammals up to squirrel size; occasionally other birds up to the size of a francolin; also carrion.

The Gabar Goshawk's numbers in Kruger appear to be on the increase. Not much is known about this raptor's movements. There seems to be a resident population in Kruger as well as migrants from elsewhere in Africa.

A Kruger Park study has found that of 216 birds, 14 were melanistic and there has been one recorded albino in the Park. It is a secretive bird that hunts from a discrete perch. It feeds mostly on other birds, particularly doves, pipits, weavers, waxbills, plovers and young francolins.

It is a determined hunter known to pursue another bird for up to five kilometres in an attempt to catch it. The Gabar Goshawk likes to raid weavers' nests, which it rips open to reach the eggs and nestlings. Roberts VII has an account of a Gabar Goshawk being killed by a group of Southern Pied Babblers after it had killed one of their party.

Peter Steyn recounts an interesting incident in which a Gabar caught a bat of the same size but was unable to kill it - undeterred, it flew with the bat to a nearby stream and held it underwater until it drowned! 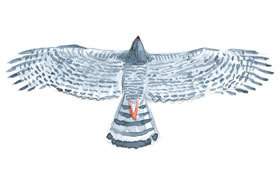 Mostly small birds up to the size of a small francolin; occasionally small mammals, reptiles and insects.

Commonly seen in the denser woodlands throughout Kruger. 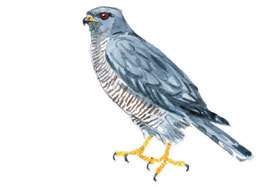 The Shikra* is thought to be a Kruger resident but numbers increase in winter suggesting a migration from elsewhere in Africa. It is comfortable in most habitats, but generally prefers the hot, low-lying areas that receive more than 600mm of rain a year.

It is a bold hunter usually found singly in savannah woodland. It has a dipping flight between trees and often comes up almost vertically to its chosen perch. It scans the surroundings for its main prey of lizards and insects, which it then swoops on and eats on the ground. It also goes for other birds, which it sometimes catches in the air. 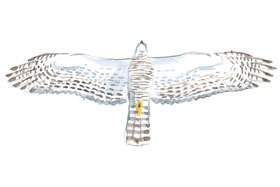 Widespread throughout the Park, particularly in riverine forests along the major watercourses; often seen on the Sabie River near Phabeni. 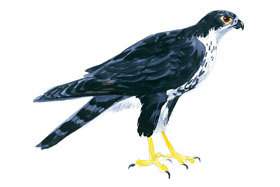 The Black Sparrowhawk is the largest accipiter of southern Africa. There are an estimated 800 breeding pairs in north-eastern South Africa, but it is not often seen in Kruger. It is a monogamous bird that does not stray far from its home range and is found mostly near riverine bush where it can perch under cover for long stretches.

Almost all of its prey is other birds, mostly under 300 grams in weight. For some reason, it dislikes the Egyptian Goose and Trumpeter Hornbill, and is also very aggressive towards other raptors, particularly the African Fish-Eagle and Wahlberg's Eagle. This is probably because they usurp its nests. It also acts angrily towards monkeys and dassies. It whistles noisily during breeding season or when threatened. 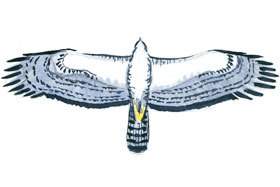 Most of the diet consists of smaller birds - doves, quails, bulbuls, mousebirds, shrikes and weavers; but it is an opportunistic feeder eating small mammals as well.

Hard to see as it favours very dense woodland areas - riverine forest in the north of Kruger, also recorded near Skukuza. 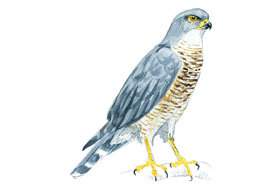 This uncommon resident is a secretive and aggressive little bird found on the edges of dense woodland and along river valleys. There are about 1 000 pairs of Little Sparrowhawk in north-eastern South Africa, and research in the Sabi Sands game reserve adjoining Kruger indicates it has an average range of 148 square kilometres from its nesting site.

It hides in thick woodland overlooking grassy areas and takes its prey in a short, sharp swoop. It feeds almost completely on small birds but sometimes takes insects. It is very active when veld fires break out and will hunt birds and insects fleeing from the flames. 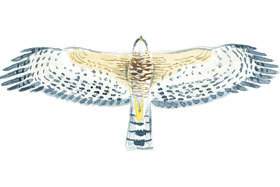 Grey upperparts and white rump; eyes are orange-yellow and ceres and feet are yellow; diagnostic white spots on tail.

Ninty-seven percent of its diet is other birds - doves, mousebirds, swallows, weavers, bishops and mannikins; also insects, bats and lizards. 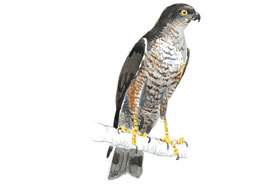 The African Goshawk is not common in Kruger and there is uncertainty as to its exact status here - it is restricted mostly to patches of dense riverine bush. It is known for its characteristic early morning call and aerial display. Pairs nest in tall trees and thick bush along riverbeds, with each pair asserting itself over a territory of about 28 square kilometres. It often changes its roosting site.

It feeds mainly on other birds - particularly doves, francolin and quail as well as nestlings and bats. It also hunts rodents. An aggressive bird, often getting into altercations with other raptors - it has been seen taking on a Secretarybird and there are reports of it being attacked and eaten by Peregrine Falcons, Black Sparrowhawks and Shikra. 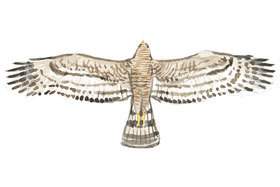 Hunts from the wing or a concealed perch; ninety-nine percent of its diet is other birds - mostly pigeons and doves, also cormorants, plovers, hornbills, shrikes, sparrows and weavers; less than one percent of diet is small animals such as rodents and mongooses.

Well-developed woodland, especially along the Luvuvhu and Sabie Rivers.