Vultures are among the most dramatic raptors. Traditionally, they've enjoyed bad press because of their grotesque appearance and scavenging nature. Perhaps we project the darker sides of human nature onto these birds, which seem to embody our worst traits of greed, selfishness and preying on the vulnerable.

The best place to find vultures is obviously at a kill. They are most often seen in the central plains around Satara and the eastern grasslands where most of the grazers and their predators are found.
There have been sightings of the rare Egyptian Vulture at Tshokwane and at Lugmag Dam south-west of Satara, while the uncommon Palm-nut Vulture has been recorded at Makuleke and Pafuri in the north.

To watch the interaction of vultures at a kill is like witnessing the unbridled nature of food politics. The Shangaan proverb that translates as 'where the vultures assemble, there is a kill' refers to the fact that when people gather together there is always a purpose in mind.

Vultures fight unashamedly over whatever scraps they can get, and when they descend on the proverbial trough, their grim determination is evident - these birds can consume a kilogram of meat in a minute and strip a carcass within hours.

Vultures are, however, great ecologists, having a high sense of personal hygiene and are a manifestation of the adage of patience as a virtue . They clean the veld of carrion, thereby minimising the impact of animal disease, and they bathe regularly in rivers after gorging themselves at a kill. 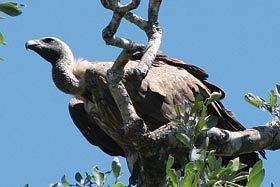 Almost all the vultures in Africa are represented in Kruger, the main exception being the Lammergeyer, which is restricted to the Kwazulu-Natal Drakensberg, and the Palm-nut Vulture, which is found on the eastern seaboard (rarely seen in Kruger). The Park has thus become a vulture sanctuary, mainly because of the predator activity on the ground, and secondly because of poisoning in non-protected areas of southern Africa.

"Natural history" writer "Bob Scholes" believes that up to 74 000 larger animals are killed by lions, hyaenas and other carnivores in the Park each year, providing an ample food source for the resident vulture population.

Vultures spend most of their time in the air, soaring high on thermal currents and keeping a close watch for animal activity on the ground. They have incredibly sharp eyesight. When they spot a kill, they will descend onto nearby trees very quickly and patiently wait for up to 36 hours to get their share of the pickings. Several different species will gather in an uneasy truce waiting for the appropriate moment to strike.

Physically, all vultures appear built for scavenging. They have strong, hooked beaks that can tear a carcass open but unlike other birds of prey, their feet are not suited to catching live animals. The main exception appears to be the Hooded Vulture - as the smallest and most prone to being bullied off a carcass, it has diversified its diet to include termites and small animals such as lizards.

In Shangaan folklore the vulture, Koti , is associated with dreams and the ability to see into the future. Traditionalists say the White-backed Vulture's habit of roosting in dead trees allows it to dream of death, thereby guiding it to a carcass the next day. Some sangomas claim the head of a White-headed Vulture, mixed with other muthi, enables one to predict the future, and is particularly effective in picking winners at the horse races.

The White-backed Vulture is the most common vulture in Kruger. There are approximately 2 000 pairs in the Park, concentrated mostly in the dry, lightly wooded grasslands of the east and mopaneveld of the north. They are the most gregarious of vultures, often roosting in large communes where they sleep with their heads tucked under their wings. They often soar at great heights during the day and depend on either the Bateleur or other vultures to lead them to a kill.

When the mammalian scavengers move off the carcass, the White-backed Vulture swoops down and rushes in, often driving off other vultures through their sheer weight of numbers. They are voracious eaters.

Peter Steyn records that about 50 White-backed Vultures consumed 23kg of meat in three minutes flat, 'an awesome spectacle... all that remained was skin, bones and a bare patch of dusty earth where the scrimmage had taken place.'

The satisfied birds, covered in dust and caked with blood, then retired to their nearest bathing place to wash off. Their eagerness to get at the meat can be their undoing. There are reports of White-backed Vultures being killed by other vultures after climbing inside the body cavity of large mammals and getting trapped. White-backed Vultures nest mostly in acacia trees, often above Red-billed Buffalo-Weaver nests. When mating, they sound like rhinos in distress. 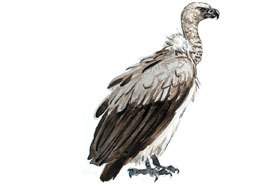 Carrion specialist preferring softer parts of the carcass; usually outnumber other vultures at the kill.

Throughout the Park, but mostly in the central grasslands around Orpen and Satara, also mopaneveld and around Punda Maria.

The Lappet-faced Vulture is the largest resident vulture in Kruger and a threatened species. There are only an estimated 49 breeding pairs in the Park, each covering a territory of up to 900 square kilometres. They spend much of the day soaring and gliding at speeds of around 50km/h. 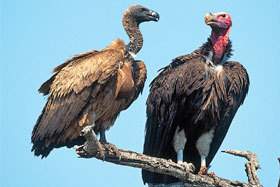 Pairs rarely interact with other pairs but do congregate at kills and bathe together at water holes. When they drop out of the sky they usually descend in a languid spiral and are often the last vultures to arrive at a kill. However, they usually quickly assert their dominance using their size to bully other contenders off the carcass. They tend to eat the skin, tendons and ligaments, which other vultures find hard to process, and therefore do not go hungry for arriving late. They sometimes copulate near carcasses.

Leonard Gill has described the Lappet-faced Vulture as 'one of the most hideous birds in the world'. At the other end of the spectrum, he believes that the White-headed Vulture is 'the handsomest of African vultures, almost a pretty bird by contrast with the Lappet-faced'. 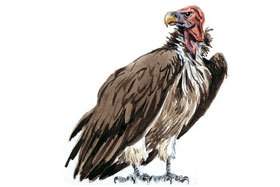 Aggressively feeds on carrion but may occasionally take live animals and insects.

Less wooded grasslands around Satara stretching up to east of Punda Maria. 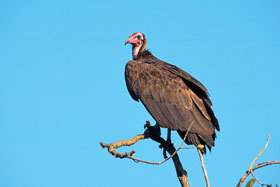 There are an estimated 65 Hooded Vultures in Kruger. They are usually found singly but sometimes in pairs. They are believed to actively follow wild dog and spotted hyaena packs in anticipation of trying to get to a kill as quickly as possible. They try and rush in first to seize chunks of meat before they are pushed away by other vultures.

The Hooded Vulture eats on the periphery and then rushes back for more scraps, often pecking in the soil like a chicken. Its thin bill enables it to get into the finer bone crevices for morsels overlooked by the other vultures. The Hooded Vulture does not seem put off by hyaenas at the kill and will sometimes dart between their legs for scraps. It is a very clean feeder, rarely becoming soiled. 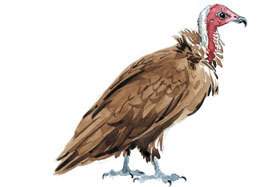 Struggles to compete with other vultures around carrion, so often feeds on scraps but also bones, refuse and dung; known to eat human and animal faeces, stranded fish, grubs and insects.

Wooded savannah in the central and eastern grasslands around Satara; breeds in tall, thick-canopied trees along rivers.

The White-headed Vulture is a rare sighting as there are not many of these birds in the Park. Indeed, there are only 500 breeding pairs in the whole of southern Africa. They are generally seen in north-eastern Kruger where they nest in the Baobabs. White-headed Vultures are highly monogamous birds usually choosing one partner for life. The female is usually dominant. Pairs sometimes greet each other with a curious head-twitching movement.

They generally appear at kills together but are frequently pushed off the carcass by other vultures. This has forced them to become daring pirates, stealing food from larger birds like the Marabou Stork, African Fish-Eagles, Tawny Eagles and Lappet-faced Vultures. White-headed Vultures are not only scavengers and robbers, but predators too. Their live prey consists of small mammals up to the size of a bat-eared fox. They have also been known to attack and kill a Kori Bustard as well as a python. 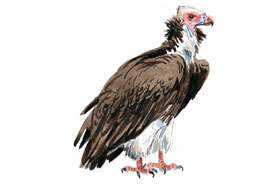 Very large; pairs are territorial, so often only two seen at a kill; often nests in Baobabs; quite effective at stealing food from other vultures.

Birds at a Kill 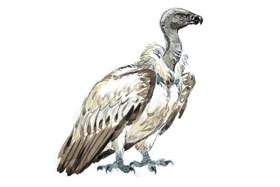 The Cape Vulture is a nomadic resident endemic to southern Africa with an estimated 3 000 breeding pairs in the region. The main colony of Cape Vultures in the vicinity of Kruger nests in the escarpment near Mariep's Kop in the Hoedspruit area. They are often seen around Orpen in groups of up to 100 birds. They are quite nomadic, traveling hundreds of kilometres from their nests.

The Cape Vulture goes for the flesh of the carcass, using its sharp mandibles to eat muscle tissue and internal organs. It can fill its crop within five minutes, which will give it enough food for three days.

Roberts VII has noted the curious 'foot show' sometimes performed by the Cape Vulture. It half opens its wings, walks about on stiff legs and then raises one spread foot while hissing loudly all the time. This display is thought to be driven by the conflicting impulses of fear and aggression. 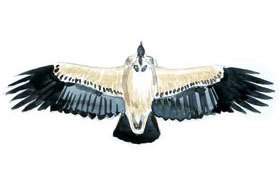 Carrion specialist feeding on the softer parts of the carcass; very aggressive at the scene of a kill.

Breeding colony in the escarpment near Hoedspruit so most often seen in the Orpen area but also in the central grasslands.