© Brett Hilton Barber
The Secretary Bird is the only species in its genus and looks unlike any other bird of prey.

The Secretarybird is the odd man out amongst the raptors. It's a grey and black terrestrial eagle, 1.3m tall, with a distinctive red face.

As a grassland specialist, it avoids dense bush and rocky habitats. The Secretarybird walks purposefully across the veld at up to 3km/h looking for prey. Its long legs are exceptionally strong and it uses them to stamp on small animals or hold them down while it tears at them with its beak.

Although it eats mostly small invertebrates, its diet includes puffadders and Southern Yellow-billed Hornbills. It can swallow a small tortoise whole.

Insects form the bulk of its diet but it will take rodents and other small mammals, snakes and birds such as the Laughing Dove and Sabota Lark. Shangaan traditional healers value the Secretarybird for muthi. A concoction using its ground bones is reputed to bring respect and power, and the ability to overcome ones fears. 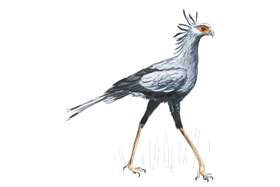 Conspicuously tall; mostly walks in grassland searching for food; distinctive, long feathers on the back of its head.

Mostly insects but also reptiles such as snakes, which it stamps to death.

Roberts VII estimates there are approximately 250 Secretarybirds in Kruger, with each bird covering a daily foraging territory of about 20 square kilometres. They are known to fly far and wide, presumably for better feeding - a Secretarybird ringed in the Sabi Sabi Private Reserve next to Kruger was found four months later in Namibia, over 1 500km away. See Veld Stalker.

'Oddly enough, Secretarybirds fly quite a lot, and not merely to get from place to place. I have seen them soaring on thermals like vultures and a friend of mine in a small aircraft met with one at a height of over 12 000 feet, near Dar-es-Salaam.' ("Leslie Brown, African Birds of Prey")