© Brett Hilton Barber
The Biyamiti catchment area is the heart of central southern Kruger. The river has its source close to Shitlhave Water Hole near Pretoriuskop.

Biyamiti - The Heart of the Central Southern Kruger

The River supports beautiful tracts of riverine woodland which can best be experienced at Jock's Safari Lodge or Biyamiti Camp, both of which overlook the river. The vegetation of the central south is mixed bushwillow and acacia woodland with lots of Magic Guarris, Marulas and Leadwoods with Ebony Jackal-berries along the watercourses. 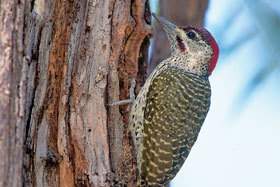 Biyamati Rest Camp is an intimate, no-frills bush camp in the mixed woodlands on the Biyamiti River four kilometres upstream from its confluence with the Crocodile River. Unlike many other camps, the chalets are not set in a laager-like ring but in a loose line overlooking the river and the surrounding bush. There are 15 self-catering cottages, equipped with electricity, stoves, fridges and freezers. There is no shop or petrol station. Firewood is on sale at reception.

The Biyamiti is a seasonal river and is therefore usually dry, but that does not diminish the prolific birdlife. The Camp is a good, year-round birding spot, but it really comes alive in summer. There is a morning symphony of birdsong, punctuated by the rolling, rattling screech of the Woodland Kingfisher, the fluty dee-dee-deederik cry of Diderick Cuckoo and the raucuous chatter of Green Wood-Hoopoes and Arrow-marked Babblers which move through the camp in small parties.

The melody is picked up by the warbling duets of Black-crowned Tchagras, the rapid, varied whistling of the White-browed Scrub-Robins, the loud, ringing calls of the Yellow-throated Longclaws, and the complex, piping trills of the Red-faced Cisticolas which sing boldly from the long grass around the chalets.

The cuckoos are very active in early summer. At least four cuckoos are usually seen at the camp - Jacobin, Klaas's, Levaillant's* and Diderick Cuckoos. A tougher test is to find the Sombre Greenbul*, which calls from a well-hidden perch in the thicker bush on the edge of the camp.

Although Biyamiti is renowned for its woodland birds, there are good waterbird and wader sightings because the camp sits on the edge of the river. The Water Thick-knee* is a resident and is usually seen on the sandbanks of the riverbed.