© Brett Hilton Barber
This is one of the best game viewing routes in Kruger with a number of parallel dirt roads off the main tar road in the vicinity of Mlondozi and Muntshe. 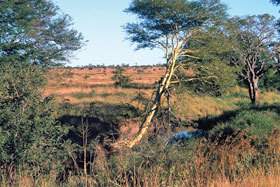 The road to Tshokwane from Lower Sabie (H10) crosses the low-level bridge downstream from the camp and then passes through thorn thickets into the open, game-rich, eastern sweetveld plains. This drive is best done early in the morning because there is good visibility over the grasslands and one may see the lions or hyaenas that hunt by night in this area, as well as the grazers they pursue.

The first recommended birders' stopping point is the causeway over the Sabie where there is guaranteed activity on the rocks, in the reeds and on the river banks. Birds seen here include the African Jacana, Goliath and Green-backed Herons while Wire-tailed Swallows dip low over the water.

The grasslands north-east of Lower Sabie are where many of the larger savanna birds occur - the Kori and Black-bellied Bustards*, Red-crested Korhaan and Common Ostrich*. Hyaenas are among the ostrich's worst enemies - not so much in that they will attack an adult bird, which is capable of running away at speeds of up to 50km/h, and can kick like the proverbial mule - but because they seek out ostrich nests and eat the eggs. Ostrich chick mortality is much higher than that of most birds, which is why there may be over 30 eggs in a single clutch.

Burchell's Coucals are particularly active here in winter, with their distinctive 'water-running-from-a-bottle' call. Lilac-breasted Rollers are common here all year round. 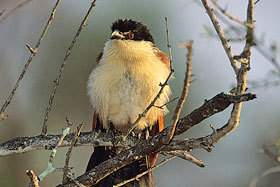 Mlondozi Dam is a compulsory stop along this road for the serious birder and African landscape connoisseur. The lookout point over the dam is on the edge of the Lebombo and provides wonderful vistas over the eastern plains and the nearby Muntshe Hill. Mlondoza is a favourite amongst waterfowl. An occassional, lucky sighting here is the White-backed Night-Heron, a shy sedentary bird that very rarely exposes itself outside of reeds or overhanging vegetation.

Most of the storks can be seen here, as well as South Afica's most common duck, the White-faced Duck, which has a reputation of being a bit of a loafer, hanging round permanent water sources and not doing much but eating plant matter.

Other interesting waterbirds here are the African Jacana, Black Crake and Green-backed Heron. The Mocking Cliff-Chat - closely associated with the Lebombo habitat - is also seen at Mlondozi. Birds altitudes around Pretoriuskop, such as the Yellow-throated Longclaw and Flappet Lark, are also found here. After good summer rains there is an off-chance of seeing the Black Coucal at Mlondoza Dam and other areas on the eastern basalts where rank grassland is found.

This infrequent summer visitor is most conspicuous early in the morning after overnight rain, when it perches in the open to preen itself and dry its feathers. 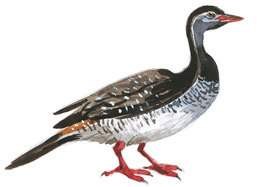 North of the Mlondozi Dan turn-off the Tshokwane Road (H10) passes close to the foot of Muntshe Hill where the Mlondozi River runs along the faultline between the basaltic plains and the rhyolitic Lebombo hills. The sweetveld grasslands around Muntshe are ideal territory for larks, pipits and longclaws - as well as large herds of grazing animals. Muntshe Koppie (435m) sits above the marshland of the Mlondozi wetland system which feeds the Mlondoza Dam before emptying itself into the Sabie River where it carves its way through the Lebombo.

Several different habitats meet at Muntshe, which just in a long ridge above the mixed woodland, vleis and open grassland. Tall, rugged old Leadwoods mark the seep lines and there are pockets of Fever-tree Acacias which are not usually seen so far south in Kruger. The road looks over a number of vleis and is a recommended place to stop, switch off the engine, wait and watch. Look out for eagles in the Leadwoods. Larger grassland birds seen here include the Secretarybird and Kori Bustard.

The combination of wetland and grassveld is ideally suited to the Giant Kingfisher, which calls raucously from tree branches overhanging the pools of water. Another common sound here is the call of the Black-crowned Tchagra. Shangaan-speaking mineworkers on their way back from the highveld mines to their Mozambican homesteads used to refer to it as the "bird of the lowveld" as its melodius appearance marked the halfway point on their long journey.

In late summer, this is one of the best places in Kruger to see flocks of hundreds of Amur Falcons* preparing for their northern migration . Muntshe specialties include the White-throated Robin-Chat* which can mimic the calls of 28 other bird species, sampling them, as it were, into its own wide repertoire of songs. The colourful Southern Carmine Bee-eater and European Roller are common in summer when the grasslands are at their most nutritous, while Lilac-breasted Rollers always hawk from trees alongside the road. 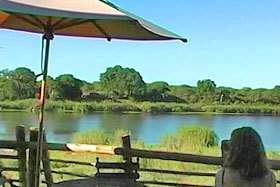 Where to stay Around Sabie