© Brett Hilton Barber
There are two main routes between Crocodile Bridge and Lower Sabie - the Gomondwane Road (H4-2) through thorn thickets into open woodland and the Nhlowa Road (S28), which crosses the south-eastern grasslands, skirting the Lebombo. Variations on the thicket and grassland theme are found on the S130 and Mativuhlungu Loop S82. 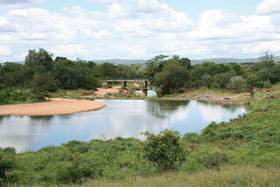 The Crocodile Bridge area is a juxtaposition of open grassland and dense thorn thickets, also known as Delagoa thorn thickets or Gomondwane Bush. It's one of Kruger's driest areas receiving about half the average Park rainfall. Thus many species associated with arid areas are found here - for instance, the Burnt-necked Eremomela. This small warbler favours the acacia thornveld and is not found much further to the west.

The H4-2 cuts through some fairly intimidating thorn thickets for much of the route to Lower Sabie. At times these open up to reveal small, localised pans and vleis, which after heavy rains are excellent birding spots. These include Gezintfombi Dam, Zhambhala, Mpemane and Gomondwane, all of which are part of the Vurhami Spruit system that feeds into the Crocodile River near Crocodile Bridge Camp.

The thornveld is a busy birding environment with lots of starlings and shrikes - particularly the Magpie* and Southern White-crowned Shrikes, which are usually found in small, noisy feeding flocks.

During summer, these vleis often host migrant crakes. The underlying geology of the area is basalt, which is relatively water-impervious. Therefore the vleis hold water long after the rains have gone and are a major attraction for water-dependent species in the south-east of Kruger.

The spiky, often impenetrable, tangle of various acacia and albizia species is a favoured haunt of the elusive black rhino.

A bird that shares the same habitat taste is the White-browed Scrub-Robin*, which feeds extensively on larvae and beetles found in rhino dung and that of other animals. It seldom moves out of the thick, scraggly undergrowth, but when it does emerge it can be seen hopping about in search of insects, which form the bulk of its diet. The White-browed Scrub-Robin* is not much of a mimic - its song is a repetative set of loud, whistled phrases, describe as "Williedee-bedee-bedee-bedeeo". 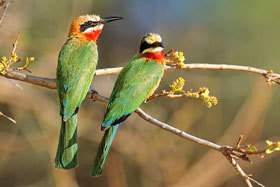 The Gomondwane thickets, which at times are over three metres tall, line most of the road to Lower Sabie. Dominant trees here are Knob-thorn, black monkey and Scented-pod Acacias, which attract prominent insect-eaters such as the Lilac-breasted Roller and Southern Yellow-billed Hornbill. There are often bird "parties" in these thickets where different species - such as Burnt-necked Eremomela, Yellow-breasted Apalis and Stierling's Wren-Warbler* - congregate to feed on the same banquet of insects.

The Red-backed Shrike is a migrant that arrives early in summer, often seen in the Park in mid-August. It is conspicuous in the thornveld, perching on trees on the side of the road. Its feeds mostly on insects, but Robert's VII records that during migration it has been known to prey on the Barn Swallow.

The thickets give way to more open countryside about 12 Kilometers from Lower Sabie shortly after the Mativuhlungu Loop into the Sabie River catchment area, opening up views onto the Lebombo, particularly Muntshe Koppie abd the Sabie River cutting into Mozambique. There is a turn-off east from here to Duke's Water Hole (on the S137) via the S130. There are vleis in between the thorn thickets at the junction of the S137 and S130 where the Black-crowned Tchagra and Golden-breasted Bunting can sometimes be seen.

In summer, there are often lots of bee-eaters here - the Southern Carmine, White-fronted and European Bee-eaters, which sometimes perch on the power lines crossing the S137.

Bee-eaters have a quick and efficient way of de-venoming the bees and wasps they catch. They seize the insect in the beak tip in mid-flight, return to their perches and then rub it against the branch for a few seconds to make it discharge its sting before swallowing it.

Duke's Water Hole (off the S137) named in honour of the hard-drinking ranger and war hero Tom Duke, is surrounded by tall acacia trees and gardanias. It is fed by a long, finger-like pan that stretches between the windmill on the main road and the water hole. 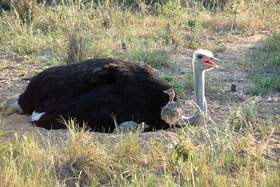 Head in the Sand

The poor Ostrich has been maligned by the fable of being as "dumb as an Ostrich with your head in the sand". It does indeed lower its head and presses it flat on the sand - that's when it is sitting on a nest of eggs and does not want to attract any undue attention from predators - is it actually quite a smart move! Ostrich egg shells are often in demand by traditional healers. In Zulu folklore, Ostrich egg crushed into food will encourage a reluctant child to eat. 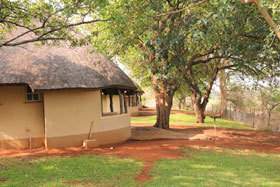 Where to stay Around Crocodile Bridge

The Nhlowa Road (S28) is one of the best birding drives in Kruger, particularly in summer after good rain. It is noted for rhinos, raptors and grassland birds. The road heads north-east across the open sweetveld savanna dotted with stunted Knob-thorn and Marula trees. In summer, many vleis and pans are visible from the road. These are often good waterbird-watching spots.

Look out for the Woolly-necked Stork, Goliath Heron and Comb Duck*, and in wet years, the uncommon Black Coucal. The grasslands draw busy parties of seed- and insect-eaters like the conspicuous Magpie* and Southern White-crowned Shrikes, White-winged Widowbirds, Blue Waxbills and parties of Arrow-marked Babblers, which all may be seen from the road. Close to the Lebombo there are sometimes Black-chested Snake-Eagles circling overhead. 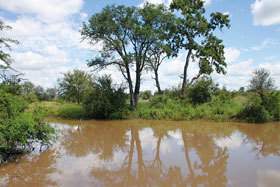 At stream crossings, look out for African Pied Wagtails. There are an estimated 4 000 African Pied Wagtails in Kruger. They are usually seen on sandbanks, walking about in their clockwork style - or dashing after crickets and other insects in a feeding manner known as 'run picking'. They often wash insects in shallow pools before eating them. They may also be seen perching on hippos.

There are often surprises along this road because of its proximity to the Crocodile River catchment area and the Mozambican coastal plains. The large Nhlanganzwani Dam and nearby Nthandanyathi bird hide are interesting because they sit on the edge of the Lebombo and eastern grassland ecosystems. An occasional visitor here is the Osprey, which is seen more often in southern Mozambique.

The Nthandanyathi Bird Hide dam retains water long after most of the water holes in the south-east have dried up so is a reliable early winter birding spot. It has a Hamerkop nest and the Green-backed Heron can sometimes be seen hiding in the reeds at the water's edge.

The Kori Bustard is sometimes seen along the Nhlowa Road. This large grassland bird has a reputation for flying into power lines because it flies looking down rather than where it is going. 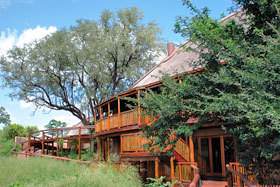 Mpanamana is tucked away in the south-eastern corner of Kruger on the edge of the Lebombo overlooking the Crocodile River valley close to Komatipoort and the Mozambique border. The 15 000 hectare private concession is one of Kruger's best birding areas because of the habitat diversity and amount of rainfall relative to the surrounding area. Mpanamana gets double the amount of rain that falls at Crocodile Bridge, barely 10km away.

The concession landscape is one of thorn thickets, flat open grasslands with shrub acacia, dense riverine bush, pockets of marshland along the base of the rugged foothills and a rich variety of woodland trees on the Lebombo itself. There are therefore grassland birds such as whydahs, widow-birds, cisticolas, pipits and woodland birds such as rollers, starlings, coucals, Grey Go-away-birds and hornbills.

There are three camps in Mpanamana, the main one being Shishangeni Private Lodge, which has 20 chalets, each of which has its own game viewing deck looking out at tree canopy height over a watercourse that runs into the Crocodile River. The main lodge area has a large lounge and intimate bar and dining area and can host small conferences. Shishangeni caters for children of all ages, providing childcare facilities and entertainment. Game drives and specialised birding walks can be arranged with the lodge management.

Birds that are usually seen easily from Shishangeni are the Giant Kingfisher, Red-faced Cisticola, Common Waxbill, and Jameson's Firefinch, while there are usually lots of swifts and swallows in summer - White-rumped Swift, Common and Lesser-striped Swallows. Village Weaver* and Southern Masked-Weavers nest together at the lodge.

The concession has two bush camps which are more secluded and offer excellent birding. Shawu is a luxury tented camp with five units overlooking Mpanamana Dam some five kilometres from the main lodge. Built in 1957 to provide a permanent water source for buffalo and other grazers, Mpanamana is the largest dam in south-eastern Kruger. Among the waterbirds here are most of the herons and storks, the smaller waders and summer migrants like crakes. Occasionally there are flocks of flamingoes at the dam or the odd Pelican blown in from Mozambique.

An uncommon Kruger raptor occasionally seen here is the African Marsh-Harrier. Shonga is the other bush camp - it has five luxury tents and is in the heart of the concession. Strategically placed on the edge of the Lebombo, between the grasslands and the mountains, it is a good spot for passerines such as the Black-bellied Starling* and Brown-headed Parrot, as well as for a variety of sunbirds attracted to the surrounding euphorbias and aloes.