The Crocodile River road is good for birding for two main reasons. Firstly, and oviously, it tracks the Crocodile River, and secondly it crosses several different vegetation and climatic zones.

Birds from both the escarpment and the Mozambique coastal plains are occasionally seen along the river. Although the pristine experience of the drive is sometimes compromised by human settlements on the other side of the river outside the Park's boundary, it is one of the best summer drives for seeing cuckoos in Kruger - Diederick, Great Spotted, African, Levaillant's*, Klass's, Red-chested and Jacobin Cuckoos. Most cuckoos are intra-African migrants whose main diet is caterpillars.

The Jacobin usually lays its eggs in the nest of bulbuls and shrikes. One unanswered curiosity is the variation in the colour of its eggs - north of the equator its eggs are greenish-blue, but in southern Afica they are pure white. (See Cuckoos - Nature's Bad Mothers) for more cuckoo curiosity.

Hippo Pools get-out point is seven kilometres from the gate on the Crocodile River. Although it's not well shaded, it is a good spot to stretch the legs and take in the rocks and the reeds of the river. There is a guard at the site willing to accompany one onto the rocks, which offer good views over the reed beds where the Goliath and Green-backed Herons may be seen.

The best birding spots along this road (which could be called 'impala drive" because of the proliferation of these antelope) are where the Crocodile River is joined by four major tributaries - the Bume, Biyamiti, Mlambane and Matjulu Streams. There is a partularly good stopping point where the S25 crosses the Biyamiti. Be warned though that during times of heavy rainfall the water levels can rise in the western Park.

There are bee-eater nesting sites in the river banks close to the river crossing. In the late afternoon, Blacksmith Lapwings* often enjoy sandbaths in the thick sand on the road edges. There is usually plenty of activity involving the usual suspects - the hornbills, go-away birds, rollers and shrikes - but as the road passes closer to the river there are sometimes less predictable sightings such as the African Pygmy-Kingfisher, Eurasian Golden Oriole and Long-tailed Paradise-Whydah. Common raptors here are the Martial Eagle, African Hawk-Eagle and Dark Chanting Goshawk.

Of course this drive can be taken in the opposite direction 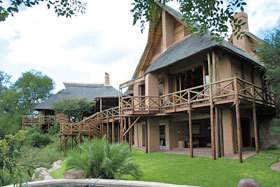 Lwakahle Concession is a 15 000 hectare private reserve in central southern Kruger. There are several African iron-age sites here dating from the 16th and 17th centuries as well as a section of the old Delagoa Bay transport road. There are three distinct habitat zones in the concession - the bushwillow and raisin-bush scrubland in the south, the gabbro sweetveld in the middle and Knob-thorn and Marula savanna in the north, each of which has its own birding personality.

Lukimbi Safari Lodge has 16 luxury suites, each with its own private lounge and deck overlooking the Lwakahle Stream which is part of the Crocodile River catchment area. The Lodge has a good library, gym and chapel - just in case the flush of bushveld romance necessitates a sudden (or planned) exchange of wedding vows. One of Kruger's more unusual kills took place at Lukimbi shortly after its launch in 2002 - a leopard pursued an impala into the dining area of the lodge sometime after midnight and slaughtered it near the buffet table. It was probably a good thing that all guests were asleep - by the time they arrived for breakfast, staff had cleaned up the grisly remains of the kill.

Lwakahle has a range of game birds - a good test is to try and see the following species in the concession: first prize is the shy Shelly's Francolin, which has a shrill call that sounds like 'I'll drink your beer' repeated frequently. Other game birds regularly found at Lwakahle are the Natal Spurfowl*, Swainson's Spurfowl*, Coqui and Crested Francolins, and the Kurrichane Buttonquail. These birds attract the culinary attentions of Bateleurs, African Hawk-Eagles, Wahlberg's Eagles and Martial Eagles which are the most commonly seen raptors in the area.

A concession speciality is the Great Spotted Cuckoo, which is usually found in the north of the Park, while a fairly common bird in the mixed woodland in front of the camp is the Long-billed Crombec. 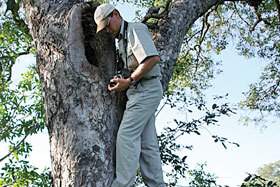 Lukimbi rangers have been monitoring a regular Southern Ground-Hornbill (Nghututu in Shangaan) nesting site on the concession for several years. Although these birds are found throughout Kruger, their numbers are low and the species is vulnerable because of its slow breeding rate. 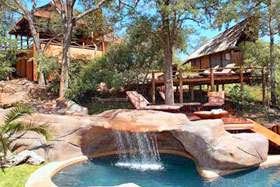